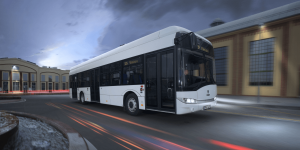 Note that Skoda Electric is not part of the Volkswagen Group unlike the Skoda brand for cars but runs under the roof of Skoda Transportation. The Czech outlet specialises in making electric motors for transport, so for vehicles such as buses, tramways, suburban trains and the like as Skoda Electric.

On the cooperation at hand, Proton announced the prototype fuel cell electric buses built with Skoda Electric would be brought to European bus operators by the first quarter of 2020. The initial target is to produce and sell at least ten such hydrogen vehicles per year.

Proton Power Systems chief executive officer Faiz Nahab said he was “pleased” to have scored this agreement with the Czech manufacturer. Their market value rose 11 per cent after the announcement.

The company has been looking for cooperation for some time now with another example being Proton’s planned joint venture with e.Go Mobile to develop a fuel cell range extender for their minibus reportedly. Although this is unconnected, it is remarkable that the Munich-based start-up e.Go has also become a Volkswagen partner most recently. In this case, they plan on sharing the upcoming MEB platform for electric vehicles.