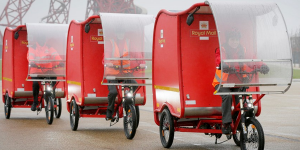 Britain’s postal service Royal Mail will begin a trial with pedal-assist trikes this March. Eight of the (relatively) light electric three-wheelers will be part of a test run at three locations.

Royal Mail will trial the eight pedelecs on delivery routes in Stratford, Cambridge and Sutton Coldfield over six months, beginning later this March.

The e-trikes use regenerative braking and solar panels to top up a 48v lithium battery, apart from the main charge of course. The motor delivers a standard 250 Watt and thus helps the postmen and women along with 0.34bhp boost when pedalling.

More unusual is the size of the electric trikes that come with a large box. Royal Mail says it measures 1,20 x 1,96 metres so that all letters and an array of packages can fit inside.

In general, however, Royal Mail lags behind in electrification. The delivery company has 47,000 vehicles, but only 100 of those are electric. Progress has been slow so far with single trials such as this one in Essex being tiny first steps.

Also for their trike trial, Royal Mail will assess the e-bikes potential to see whether it could expand their use across the UK “as part of a usual delivery pattern on suitable routes”.

Still, the impression remains that the British post is a little late, or say, has some catching up to do. It may be worth to take a look at other countries and logistic companies though. Both the Swiss and Austrian post have made wide-ranging commitments to electrify the entire fleet reportedly. Also Deutsche Post is an early member of the EV100 pledge and is, still, building its own electric delivery vans, although it had been looking to sell the StreetScooter business. On a corporate level, FedEx is another example of global fleet electrification, also in the heavy-duty segment.