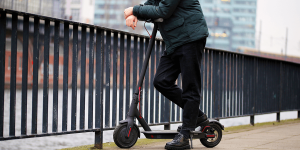 The German federal cabinet has passed the long-announced Small Electric Vehicle Ordinance (eKFV). Now it is up to the federal council to take the next steps. It could adopt the new regulations on 17 May so that the regulation would enter into force this spring.

Germany has been relatively inert regarding electric micro-mobility. Until now, PLEVs (Personal Light Electric Vehicles) have not been legally approved for use on public roads, despite the fact that appropriate legislation was passed European level some time ago.

On the European level, the new Type Approval Regulation (EU) No. 168/2013 for two- or three-wheeled and four-wheeled vehicles has been in force since January 2016. This expressly excludes self-balancing vehicles and vehicles without seats from its scope of application. For these vehicles, regulations can be made in national legislation. In Germany, only the electric mobility aids defined in the Mobility Assistance Ordinance (MobHV), which is still in force, may be used on public roads. These mainly include Segways or similar vehicles. The Mobility Equipment Ordinance will be replaced by the Small Electric Vehicle Ordinance. The Small Electric Vehicle Ordinance is intended to enable participation in public road traffic, irrespective of type, for electrically powered vehicles without seats and self-balancing vehicles, also in the sense of sustainable mobility.

Vehicles with the following characteristics are covered by the ordinance:

The BMVI translates this as follows: A small electric vehicle must be roadworthy, be able to brake, be controllable and have a lighting system.

A distinction is made between two types of miniature electric vehicle for which different rules apply:

Due to the introduction of the Small Electric Vehicle Ordinance, changes in road traffic regulations such as the Driving Licence Ordinance (FeV), the Vehicle Registration Ordinance (FZV) and the Fines Catalogue Ordinance (BKatV) have become necessary. In addition, a new insurance certificate in the form of an adhesive insurance sticker will be introduced, which was specially designed for attachment to miniature electric vehicles. It is now also clear that there is no obligation to register.

In a parallel procedure, the Federal Ministry of Transport and Digital Infrastructure is currently working on a draft ordinance for the use of miniature electric vehicles without handlebars on public roads, which could then also be used to approve electric skateboards, monowheels or hoverboards.

German Minister for Finance weighs in for electric mobility