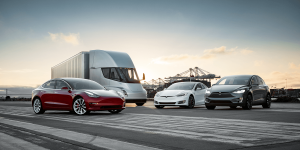 Tesla delivered around 63,000 vehicles in the first quarter of 2019, including around 50,900 Model 3 and 12,100 Model S and Model X. This corresponds to an increase of 110 per cent compared to the same quarter last year. Compared to the last quarter of 2018, however, this represents a decline of 31 per cent.

In terms of deliveries, at the end of this quarter, another 10,600 Tesla electric cars were on their way to customers worldwide. In this first quarter of this year on the production side, Tesla produced 77,100 vehicles, of which 62,950 were Model 3 and 14,150 Model S and Model X. Staying with production figures for the moment, Tesla produced a total of 34,494 vehicles in the prior-year quarter, so the last quarter of 2018, which included 9,766 Model 3 and 24,728 Model S and Model X.

Back to deliveries, and a comparison to this time last year, the Californian company delivered 29,980 vehicles throughout the first quarter of 2018, including 8,180 Model 3, 11,730 Model S and a further 10,070 Model X. In the course of the past year, production and delivery figures have increased massively, not least because of the popularity of the Model 3. These figures have now quietened down somewhat.

There is a reason why the production figures were higher than the deliveries: At present, the Tesla electric motors are only produced in San Francisco and shipped from there to customers all over the world. That is why Tesla expects production volumes to remain higher than deliveries in the future. This could change especially at the beginning of 2020, as Tesla plans to start production of the Model 3 in its Gigafactory 3 in China at the end of this year. However, high volumes are not expected to roll off the assembly line until 2020. 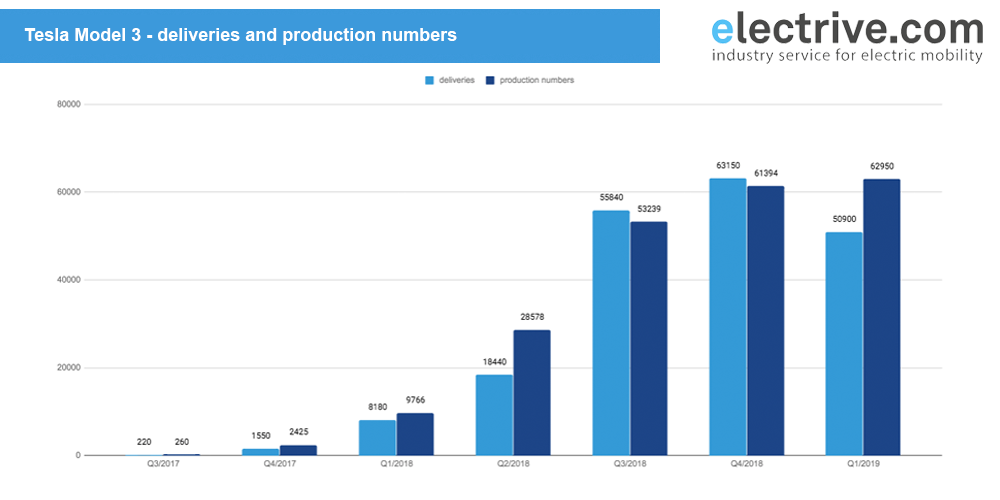 Tesla does not give any reason for the decline in production in the past quarter. The Californians, however, at least justify the decline in deliveries with the challenges posed by the start of deliveries of the Model 3 to Europe and China. For several weeks now, thousands of Model 3s have been shipped to the European and Chinese markets. This is reflected above all in the number of new registrations.

The front-runner in terms of new registrations in Europe is Norway. There, BEV registrations reached a market share of 58.4 percent last month. The Tesla Model 3 (5,314) accounted for around half of the 10,728 battery-powered passenger cars. In Germany, 36 per cent (2,367) of the 6,616 new electric cars were Tesla vehicles. The majority are attributable to the Model 3. In the Netherlands, 2,195 new Model 3 cars were put on the road. In France, Model 3 registered 1,153 new cars. And in Sweden, the number was 1,005 new Model 3s.

As far as Switzerland is concerned, Tesla recorded growth of 327 per cent in the first quarter of 2019. 1,597 Californian electric vehicles were delivered there. By way of comparison, 1,462 Tesla electric cars were delivered in 2018 as a whole. Overall, the market for electric vehicles in Switzerland has grown strongly. Specifically by 131 per cent to a total of 3,023 vehicles. More than half (52.8 percent) of the e-cars are Tesla vehicles. The overall market share of electric cars in Switzerland is currently 4.2 per cent.

Ford’s first EV for China will be a compact SUV