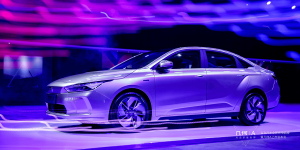 The first model, Geometry A, is an up to 120 kW electric sedan that is available as a standard and a long-range version. CATL batteries with a capacity of 51.9 and 61.9 kWh, respectively, and a range of 410 and 500 NEDC kilometres are used. Quick charging from 30 to 80 per cent should be possible in half an hour. Geely gives an average consumption of 13.5 kWh per 100 km for the Geometry A. The average consumption of the Geometry A is 13.5 kWh per 100 km.

Geely itself describes the exterior design as “minimalist” and “avant-garde”. Particular attention has been paid to the aerodynamics of the exterior. The minimalist style is also reflected in the interior of the BEV. In addition, several cameras and sensors have been installed to enable autonomous driving functions of level 2+. Prices in China start before subsidies at 210,000 yuan (31,250 dollars) with the standard battery or 230,000 yuan (34,200 dollars) in the long-range version. Geely states that it has already received 27,000 advance orders for Geometry A – including 18,000 from overseas, including Singapore, Norway and France.

“The launch of Geometry and its first product advances Geely’s strategic goal of becoming one of world top 10 automotive groups,” said Geely President An Conghui during the presentation. The new brand will work with exclusively developed platforms and distribution channels and will focus on the Chinese market, taking orders from abroad, as in the case of Geometry A. The new brand will also be able to offer a range of products and services for the Chinese market. The Chinese company explained that the name was chosen on the philosophical basis of the mathematical geometry “which emerged thousands of years ago to describe the world as humans saw it”.