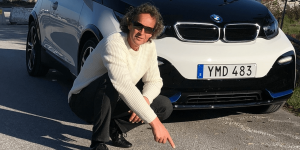 As part of a public-private consortial project in Sweden, a test track for the inductive charging of electric vehicles while driving is to be built which is compatible with trucks, buses and cars. The Swedish transport authority Trafikverket has now awarded the contract for a 1.6-km test stretch.

The technology for the inductively charging road comes from the Israeli company Electreon Wireless. Specifically, the consortium is to implement a 1.6 km test section between the airport and the centre of the city of Visby on the west coast of the Swedish Baltic Sea island of Gotland.

The most significant innovation of the road technology, which has seen applications in a variety of projects and materials, including a major stretch planned in China for 2022, or specially enhanced concrete, is that on this road, both electric buses as well as trucks in full motion. The Smart Road Gotland is also being used as a pilot project, and data will be used to evaluate the effectiveness of the technology in Swedish transport.

“Electric roads are an important contribution to reducing CO2-emissions from heavy transportation. Demonstrating and evaluating new technical solutions for electric routes is one of our most important steps in our long-term plan for a potential rollout of electrified routes on the heavy road network in Sweden,” says Jan Pettersson, program manager at Trafikverket.

Update 18 November 2019: Work has begun to install the first test track on the Smartroad Gotland. The project will start in early 2020 with an electric truck.

Update 26.02.2020: Test operation has started at Smartroad Gotland, where a fully electric 40-tonne truck including trailer has been statically wirelessly charged. The charging capacity of the test in winter conditions was specified as 20 kW, the efficiency as 90 per cent. As a next step, the electric truck is to be inductively charged while driving on a public road on the Swedish island of Gotland in early March.

Update 18 March 2020: Following the above described static trials, another fully electric 40-tonne truck was now charged while driving on the Smartroad Gotland, all without wires of course. In the new dynamic test, 45 kW was inductively transferred to the battery of the e-truck.

The operators intend to increase the transmitted power and vehicle’s velocity gradually to reach the target of 125 kW and motorway speed in the next few months.

Update 03 June 2020: While the virus has slowed down the development, ElectReon Wireless says it will launch the next phase of its project in Sweden in September. After the trucks, the next stage will see a 4.1 km long track being equipped with coils to dynamically charge an electric shuttle bus.

Update 15 October 2020: ElectReon Wireless has successfully completed a test in Sweden. On a prepared test track near Stockholm, the battery of an electric truck was inductively charged while driving at 20 kph – with an output of 100 kW. In the next step, ElectReon plans to test the wireless charging of an electric truck at 80 kph.

Update 27 January 2021: ElectReon AB has now completed further tests with an electric truck on the Smartroad Gotland and achieved the following results: At speeds up to 60 km/h, the inductive charging system transmitted an average power of 70 kW to the five receivers mounted on the truck – and consequently to the battery. The tests took place on a 200-meter section of road. Over the next few months, ElectReon AB plans to put other road sections into operation, subject to pending regulatory approvals, until the entire wireless electric road, with a total length of approximately 1.65 kilometres, is in operation. There are also plans to further increase the charging capacity and to conduct tests with an electric bus.