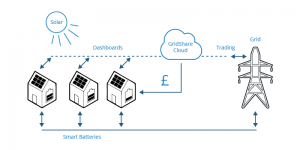 London-based Moixa plans to develop a virtual power plant (VPP) that will combine solar panels, batteries and electric vehicles. The VPP could include hundreds of households, schools and other facilities in southern England and Moixa aims to eventually scale the network up to 17 MW.

Located in West Sussex, near Worthing and Shoreham-by-Sea, the virtual power plant including the Moixa installation forms the first part of the £40 million Smart Hubs programme within a smart local energy system (SLES) project.

Over three years, Moixa wants to upscale from an initial 2MW to 17 MW, and the company’s CTO Chris Wright says the project will “demonstrate the benefits of linking power, heat and transport in one local system”.

The EV sector is going to make a start, and Moixa will use secondary batteries from a range of manufacturers in combination with electric vehicles plugged into the network. £7.2 million of the 13 million project budget are said to help to aggregate up to 2MW of capacity initially, mostly from batteries and EVs before adding other technologies. Once the VPP reaches full capacity of 17 MW, Flexitricity will take on management.

For now, Moixa says its GridShare platform that banks on AI and machine-learning will aggregate more than 1MW of spare capacity from batteries in homes, schools and council offices and will help to trade in markets such as energy. The other 1MW will come from electric vehicles once they are on-boarded in a vehicle to everything approach (V2X) and Moixa expects EV batteries to play an increasingly critical role in the VPP.

Talking about V2X, the consortium plans to build a charging station for both electric cars and fuel cell vehicles in Horsham. The site will feature a 2 MW solar carport as well as storage from a 1 MW hydrogen electrolyser. Flexisolar will provide the charging facility, and ITM Power will take care of the hydrogen technology. Beside, Moixa will install 250 EV chargers in private homes and public locations starting early next year. The chargers will be able to feed electricity into the network during peak times.

The project will run over three years backed by the West Sussex County Council and infrastructure group the Carbon and Energy Fund. The consortium has secured £13 million from the British Government’s Industrial Strategy Challenge Fund.