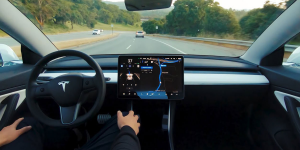 Tesla presented its latest take at autonomous driving at its “Autonomy Day” and will install the Autopilot technology in all new vehicles with immediate effect. Utilising it, Tesla plans to launch its peer-to-peer “Robotaxi” service as early as next year, provided the authorities allow it.

The new autopilot computer developed internally by Tesla has already found its way into Californian vehicle production: Since last month it has been installed in Model S and Model X, and since this month also in Model 3. Anyone who has previously purchased a Tesla with the option “Full potential for autonomous driving” will get their car upgraded free of charge.

Tesla CEO Elon Musk said at the presentation that the new technology is the “objectively best chip in the world” as it is said to be more powerful and at the same time 20 per cent cheaper than its predecessor. The new instrument will be manufactured in the U.S. by Samsung. Meanwhile, Tesla’s developers are already working on a further improved version, due in two years.

Meanwhile, the more powerful autopilot also forms the basis for Tesla’s mobility service based on the “Robotaxis” the electric car manufacturer has been talking about since mid-2016. Tesla owners should be able to make their vehicles available to others at times when they are not needed, thereby earning an average of 30,000 dollars a year. Besides, Tesla also wants to release its own autonomous fleet onto the roads. A corresponding car sharing software will be ready next year, but will run under supervision at the beginning, says Musk.

To underpin the progress towards autonomous driving, Musk also posted the following video on Twitter showing a Model 3 with the new autopilot computer and corresponding software during autonomous driving manoeuvres:

All Model 3 vehicles have recently been supplied with an autopilot as standard and are therefore somewhat cheaper: For example, the Model 3 Standard Plus in the USA previously cost 37,500 dollars and the autopilot option 3,000 dollars – now it costs 39,500 dollars including autopilot. The “Maximum Range” version of the Model 3, until recently the only one available in the DACH region, now starts in Germany at 55,780 euros including autopilot. Previously, customers had put 54,780 euros on the table without autopilot. In Austria, this variant now starts at 58,880 euros and in Switzerland at 59,890 Swiss francs. However, anyone who wants “full potential for autonomous driving” pays 5,200 euros in Germany.

Our reporter Christoph M. Schwarzer, who extensively tested the Model 3 Performance noted several defects on the autopilot, surmising that only the automatic restart in stop-and-go traffic seemed to work, while the autopilot too often recognises missed targets in the pure function of the adaptive cruise control. Besides, he said it was not possible to set the current speed in cruise control. Model 3 always selects the maximum permitted speed stored in the map material, which our test driver found to be unacceptable, since, contrary to expectations, these maps were not up to date and not in sync with the traffic signs via the cameras. Also, the autopilot on the motorway did not adhere to the right-hand driving principle, and the ramp-on-ramp-off function (“Navigate on Autopilot”) for the entrances and exits was dysfunctional. Oh yes, on two days the autopilot and rear view camera failed, and the voice control was also deaf.