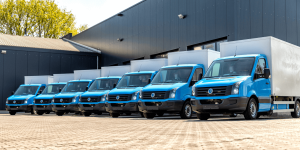 The Dutch supermarket chain Albert Heijn will supply its customers in Amsterdam with electric transporters in the future. In a first step, 25 vehicles from the existing fleet of more than 400 VW Crafters were converted by Orten to electric drives.

The conversion specialist from Wittlich in Rhineland-Palatinate states that the vehicles converted from diesel to electric drive have a “remaining payload of around 1,300 kg and a range of around 130 km”. This is sufficient to master the customer’s logistical requirements.

Together with its partner EFA-S (ElektroFahrzeuge Stuttgart), Orten Electric-Trucks has meanwhile converted a large number of electric vehicles – including many special vehicles such as a dump truck for Bochum, a 7.5-ton truck for the Dinkelacker brewery or a heavy-duty truck for the Fraunhofer IVI.

Meanwhile, food specialist Albert Heijn is no stranger to e-mobility measures. The company is one of the testers of Daimler’s Fuso eCanter and is supporting the construction of three Fastned charging stations at its branches. The announcement that the Dutch capital wanted to rely on electric transporters came just at the time when the Amsterdam city council made the move to ban gasoline and diesel vehicles from the city by 2030.