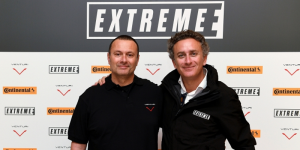 Venturi Automobiles has now been officially confirmed as the first team for the planned off-road racing series with electric SUVs called Extreme E. Venturi has also been active in Formula E since the 2014/15 debut season and will now compete in the new racing series from 2021.

As reported, the electric SUVs used will be based on a standard chassis developed for all teams by Spark Racing Technology and equipped with Williams Advanced Engineering batteries. Venturi will then be allowed to develop its own powertrain and body, just like any other team.

The idea behind the racing series is to have off-road electricians compete against each other in the world’s most extreme climates. It starts in 2021 with five events in the Arctic, the Himalayas, the Sahara Desert, the Amazon and on an island in the Indian Ocean. Extreme E will be held in two groups with six teams each on six to ten kilometre long off-road stages. The races are to be shown worldwide in the form of a documentary series. The prominent initiators of the new racing series are motorsport legend Gil de Ferran and Formula E boss Alejandro Agag.