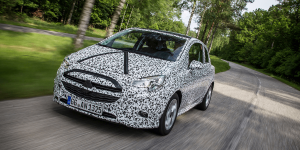 The new generation of the Opel Corsa will celebrate its world premiere on 4 June to come as a fully electric version from then on. In an interview, Opel CEO Michael Lohscheller promised an “attractive price” for the E-Corsa. He did not specify any details but substantial plans.

The German company based in Rüsselsheim, which now belongs to the PSA group, made a profit in 2018 for the first time since 1999. According to Lohscheller, this enabled them to make the necessary investments in electric mobility. Opel intends to electrify its entire product range by 2024. “The smaller vehicles, in particular, are especially suitable for electric propulsion,” said the company boss, who also explained that Opel, also known as Vauxhall, is switching from nine to just two platforms: “One small and one large, which can be used throughout the group. In addition to diesel and gasoline engines, each has an electrified drive system – either purely electric or as a plug-in hybrid.”

At the end of last year, Opel announced its intention to open the order books for the new electric Corsa and the Grandland X as PHEV in the first half of 2019. The Corsa is likely to have the same technical data as the DS 3 Crossback, and indeed Opel will enable reservations this 4 June. Lohscheller promised a competitive price for the market launch, which could be as early as December: “With the new Corsa, we are making e-mobility affordable for a wide range of customers. This will be a real “‘Volks’ electric car,” promised the CEO, clearly with a thought or two of rivalling VW. The latter launched the ‘E-mobility for all’ campaign followed by the First Edition ID.3 not even a week ago, accompanied by statements such as “We don’t produce for millionaires, but for millions”.

According to the Opel boss, the first Grandland X will officially roll off the assembly line in the company’s Eisenach plant at the end of August. The compact SUV will also be available as a plug-in hybrid version. Furthermore, Opel offers the prospect of electrifying the SUV Mokka X and the Vivaro transporter.

The parent company PSA is also preparing the transition to the electric age: By 2025, the carmaker intends to offer offshoots with electric or hybrid drive for all 40 models of its brands. It will start in 2019 with all-electric versions of the Peugeot 208 (reservations opened in the UK last month) and the DS3 Crossback. An electric version of the Peugeot 2008 will follow in 2020. PSA’s plug-in hybrid offensive starts in 2019 with a corresponding offshoot of the DS7 Crossback, the PHEV versions of the Peugeot models 3008 and 5008, the Citroën C5 Aircross and the Grandland X mentioned above.

VW Zwickau plant on schedule as ID.3 rolls out