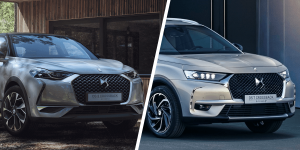 In Renault’s domestic market France, the DS 3 Crossback E-Tense starts at 39,100 Euro, for the DS 7 Crossback E-Tense 4×4 at least 54,300 Euro are due. For European customers, the prices should be in a similar order of magnitude and orders in Switzerland are open.

When comparing with corresponding models of the competition, it shows that DS is aiming for competitive prices. DS boss Yves Bonnefont assured reporters that they still want to make profits with the duo – without naming a margin, however.

Delivery of the two electrified DS models is scheduled to start this summer. They will alternate with their combustion counterparts at the Sochaux plant. Bonnefont is quoted as saying that in principle it is possible to increase the share of electrified models in total production there to up to 50 percent. However, the batteries could turn out to be a bottleneck. They are currently made by Dongfeng. The DS CEO sees a clear solution, stating: “We urgently need our own cell production in Europe. This is of fundamental importance”. The PSA plant in Sochaux near the three-nation corner of France/Switzerland/Germany is currently being considered as a site for a battery cell factory as part of the Franco-German initiative to establish cell production in Europe.

The plug-in hybrid version of the DS 7 Crossback combines a 1.6-litre petrol engine with an 8-speed automatic transmission and two electric motors, resulting in a total output of 225 kW with a torque of 450 Nm. The 13.2 kWh battery system stored in the underbody  should allow for 50 purely electric kilometres (WLTP).

With this duo, the PSA brand, which is only five years old, will enter the electric market for the first time. By 2025, the French want to have six electrified models on the market.