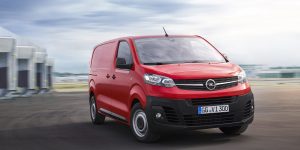 Opel has allowed a preview of the third generation of its Vivaro van. The new model will be available from dealers in late summer, and you can expect the battery-electric version to follow in 2020.

PSA-owned Opel will offer the new generation as a box van (Cargo), double cabin for up to six passengers, platform frame and station wagon. For the first time, the vehicle will come in three length variants: 4.60 metres, 4.95, or 5.30 metres. With a maximum loading volume of 6.6 cubic metres, up to 1,400 kilograms can be transported, which is 200 kilograms more than before, according to Opel. The same applies to the van’s towing capacity: at up to 2,500 kilograms, the new Vivaro pulls half a ton more than its predecessor.

In the coming year, the new generation of the van will reportedly also be available with a purely electric drive. At the beginning of 2018, Opel boss Michael Lohscheller announced the company’s intention to electrifying their vans. Just last week they said that their new Zafira would have an electric version available in 2021. In the first half of 2019, the Rüsselsheim-based German company will open the order books for two further electrified models, including the new electric Corsa and the Grandland X as a plug-in hybrid. Also, the traditional manufacturer promises the electrification of the Mokka X.

It seems that Opel is slowly gaining momentum with its electrification project. This has primarily brought about by the PACE restructuring plan presented in November of 2017. With this plan, Opel aims to return to profitability in the PSA Group from 2020. Accordingly, all European passenger car series from Opel will also have an electric version by 2024.