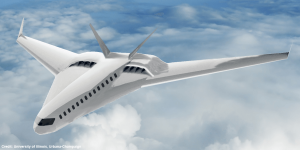 University of Illinois student researchers are leading a NASA-funded project to develop a novel approach to all-electric aviation. The team is investigating the use of fuel cells to power an all-electric aircraft.

NASA is providing three student research teams from different universities with around 15 million dollars over three years. All projects deal with the future of aviation, but only the students from Illinois are working on alternative propulsion systems.

They want to experiment with liquid hydrogen (LH2) in fuel cells to supply aircraft with energy. In addition to developing novel system components, the team also wants to develop a design concept that integrates these components and ideas into an aircraft – one that is similar in size and function to a modern commercial aircraft.

Within the framework of the program, the students relied on various scientific and non-scientific collaborations, including with the Center for Cryogenic High-Efficiency Electrical Technologies for Aircraft (CHEETA).