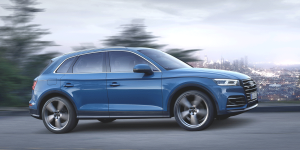 With the Q5 55 TFSI e quattro, Audi presents the first representative of its new plug-in hybrid family. The model offers 270 kW system power and a “more than 40 km” purely electric range according to WLTP. The partly electric SUV can be ordered immediately.

In Germany, Audi’s e quattro is already being offered at a starting price of 60,450 euros, but the actual market launch of the plug-in hybrid is not planned until the third quarter of 2019.

According to the German company, the Q5 55 TFSI e is the first to feature Audi’s all-wheel drive with so-called “ultra technology” in combination with an electric motor. The SUV combines a combustion engine with 185 kW and 370 Nm with an electric motor with 105 kW peak power and 350 Nm peak torque. The accelerates from 0 to 100 km/h in 5.3 seconds, the top speed is 239 km/h or 135 km/h in purely electric mode. The hydraulic wheel brakes are also able to recover up to 80 kW of energy.

The 14.1 kWh battery is stowed under the luggage compartment, with its cooling circuit coupled to the refrigerant circuit of the air conditioning system and to the low-temperature cooling circuit, which also integrates the electric motor and power electronics. The onboard charger supports a charging capacity of up to 7.4 kW. Within a good two hours, the chemical storage tank is fully recharged. The standard equipment of the new plug-in hybrids also includes the Audi compact charging system. This includes cables for household and industrial sockets as well as a control panel. The type 2 charging cable for charging at public charging points is also an available option. The vehicles can also be monitored and controlled remotely via the myAudi smartphone app. For example, customers can start the charging process, program the charging timer, receive information on the charging process, start the pre-air conditioning, or view the charging and consumption statistics.

According to the manufacturer, the driver is free to decide whether and how they want to intervene in the interaction between the two engines. Three operating modes are available for this purpose. However, the concept is basically designed so that customers can cover a large part of their daily distances electrically, says Audi. The vehicles start electrically as standard, i.e. in “EV” mode. The combustion engine is switched on according to the situation. The plug-in hybrids have the three driving modes “EV”, “Auto” and “Hold”. While other manufacturers sometimes provide an additional mode for charging the battery via the combustion engine, Audi is now dispensing with this inefficient function. The predictive efficiency assistant is intended to make a significant contribution to increasing the electric range. To this end, the drive management system integrates the route profile into the powertrain control system. The predictive operating strategy evaluates both the navigation data with active destination guidance and the information from the efficiency assistant and the vehicle sensors. From this, it generates a rough plan for the entire route and a detailed plan for the kilometres ahead. This identifies situations in which the driver should take their foot off the right pedal. The driver receives a corresponding visual message on the display and haptic feedback from the active accelerator pedal. At the same time, a proactive recuperation is initiated.

At the Geneva Motor Show, Audi announced a whole range of PHEV variants for its A6, A7 Sportback, A8 and Q5 models. In addition to the Q5, the other plug-in hybrids will also be available this year. The Q7, on the other hand, is not scheduled for a facelift until the fourth quarter of this year. The next generation of the A3 will come out at the beginning of 2020 when the PHEV will be equipped with an increased battery size of 13 kWh. The same also applies to the Golf GTE, which has not yet been available for order since spring 2018, but the VW Passat GTE, on the other hand, is back in the programme.