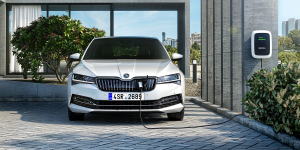 Skoda has presented their first electrified serial models for which the Czech brand has created the new subsidiary brand iV in Bratislava, Slovakia. For now, the iV range includes a battery electric model in form of the Citigo e iV and a plug-in hybrid called Superb iV.

The Skoda iV subbrand comprises both the development of its own electrified product family and a special ecosystem for mobility solutions. After the introduction of the Citigo e iV that shares most of its system with the VW e-Up, and Superb iV, the first two purely electric vehicles based on the modular electrification system (MEB) of the Volkswagen Group will follow in 2020, including the series version of the Skoda Vision iV.

Like its sister model, the all-electric Citigo e iV miniature car is powered by a 61 kW electric motor. The 36.8 kWh lithium-ion battery in the Citigo e iV enables a range of up to 265 kilometres according to the WLTP. The top speed of the vehicle is limited to 130 kph, and features acceleration from 0 to 100 km/h in 12.5 seconds, utilising the motors’ 210 Nm torque.

Battery charging can be done with a 2.3 kW station in about 12.5 hours, and CCS (DC charging at 40 kW for 80% capacity in an hour) and AC charging (Four hours using a 7.2 kW outlet) capabilities are included in the “style-trim” option for the Citigo-e iV. Two trim options are available in total, named “Ambition” and “Style”, which are simply titled “SE” and “SE L”, respectively, in the UK. According to Skoda, series production of the small BEV will start in the second half of 2019.

The Citigo e iV will retail starting in Autumn with an expected price around £15,000 in the UK, with an estimated £550 price bump between the model trims.

The Superb iV, Skoda’s first series model with plug-in hybrid drive, was also presented. A 1.4 TSI petrol engine and an electric motor jointly produce a system output of 160 kW (218 PS). The electric range is estimated up to 55 kilometres (34 miles) in the WLTP cycle. Production at the Kvasiny plant in the Czech Republic will start at the beginning of autumn this year and the market launch will take place at the beginning of 2020.

Prices for the plug-in hybrid have yet to be announced, however, Skoda “promises the PHEV will be highly competitive in its increasingly crowded part of the market and is anticipated to constitute up to 20% of sales in the UK.”

Another goal: By the second half of the next decade, the company intends to convert production in its Czech factories to green energy. As part of the electrification of the Skoda model range, the recycling or sensible secondary use of traction batteries will be added as a new ecological and economic task.