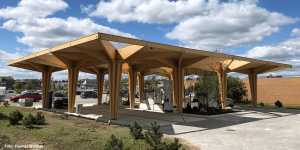 Clever and E.ON have opened the first pilot station of their future charging network in Fredericia, Denmark. The two partners aim to build 48 ultra-fast charging stations for electric cars on motorways in Denmark, Norway, and Sweden.

The pilot station, equipped with ABB high power chargers, is one of eight locations to be commissioned in Denmark by the end of 2020. Electric car drivers can charge up to 150 kW there. In the future, the ABB devices should also be able to provide up to 350 kW.

An eye-catcher here is the natural-inspired design of the charging location, which will also be used for the following charging parks. The Danish architectural firm COBE was inspired by trees whose “branches” unite at the top to form a sun canopy that lets in plenty of light and houses solar modules. Real plants are also planned to enrich the site. The approach is modular, as the “forest” can be larger or smaller depending on the number of charging points required.

As far as the timetable is concerned, according to E.On, all locations are to be in operation by 2020 with two to six charging points each. All charging stations will provide CCS and CHAdeMO capabilities, with CHAdeMO charging points limited to a charging capacity of up to 100 kW.

Clever and E.On established a 50:50 joint venture called Ultra Fast Charging Venture Scandinavia at the beginning of the year to set up and operate the fast charging network. The network of charging stations along motorways will connect cities in Denmark, Norway, and Sweden with a total of 48 ultra-fast charging locations – 28 of which will be locations funded under the EU Connecting Europe Facility (CEF) program. In total, the EU’s promotional call involved 180 high power charging stations in several European countries: Sweden, Denmark, Germany, Great Britain, Italy and France. In addition to EU funding, 20 additional locations are being developed in Norway.

The partnership between Clever and E.On dates back to the beginning of 2017. The duo is aiming to build a total of 400 HPC stations in Europe. The 180 EU-funded sites are just at the beginning of their construction cycle.