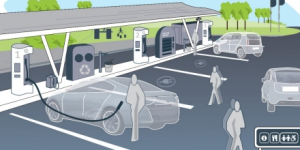 According to the partners, the project will connect cities in Denmark, Norway and Sweden with a total of 48 ultra-fast charging stations. With the 50:50 joint venture, E.ON and Clever are implementing their commitment to the EU Connecting Europe Facility (CEF) program to build 28 subsidized sites in Denmark and Sweden. In total, the EU funding call involved 180 high-performance charging stations in several European countries: in addition to Sweden and Denmark, also in Germany, Great Britain, Italy and France. In addition to EU financed charging locations, 20 additional locations are being developed in Norway.

The partnership between Clever and E.ON dates back to the beginning of 2017. The duo is aiming to build a total of 400 high-performance charging stations in Europe. The 180 EU-funded sites are still in the early development stages. They are then later to be expanded to a charging capacity of 350 kW, as soon as the corresponding vehicles are available on the market.

As far as setting up the network in Scandinavia is concerned, e-mobility customers of E.ON, Clever and third-party suppliers will have free access to the charging stations. According to E.ON, all 48 locations will be in operation by 2020, with two to six charging points each. The first charging points in Halsskov, Denmark, are already accessible to the public. According to the partners, the first major flagship project will open in Fredericia, Denmark, in the first quarter of 2019. All charging stations will feature CCS and CHAdeMO connector standards. The CHAdeMO charging points are limited to a charging capacity of up to 100 kW, however.