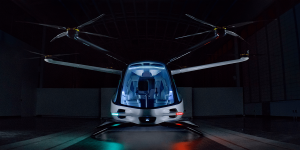 The US startup Alaka’i Technologies has presented the concept of a fuel cell air taxi called Skai, which was developed together with the BMW brand Designworks. It offers space for five passengers, is powered by six electric motors and is expected to have a range of around 400 miles (640 km).

The well-known flying taxi prototypes from Volocopter, Lilium and Co have one thing in common: they rely on batteries. The US startup Alaka’i Technologies, however, considers batteries to be too heavy for flight operation and therefore relies on the fuel cell.

The hydrogen tank will hold between 200 and 400 liters, which will keep the Skai in the air for up to four hours. The electricity generated in the fuel cell drives six electric motors, each with an output of 100 kW. This should enable a top speed of up to 190 km/h, but a much more efficient average speed of 137 km/h (85 mph).

The main argument for the fuel cell from the company’s point of view is that a pound of compressed hydrogen contains 200 times more energy than a battery of the same weight, says company founder Brian Morrison. The Skai can thus achieve the speed, range and payload that Alaka’i considers relevant for competition – with a significantly lower total weight.

Alaka’i Technologies was founded by former employees of Nasa, Raytheon, Airbus, Boeing and the US Department of Defense. The prototype of the Skai, which the company unveiled a few days ago in Los Angeles, was developed jointly with BMW Designworks. In order to keep the aircraft as light as possible, some components are made of carbon fibers. The large glass windows are designed to provide a good view for passengers. The arrangement of the five V-shaped seats also helps here.

According to a speaker, the prototype is fully functional and the first flight is imminent.