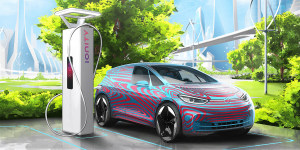 Volkswagen plans to build 36,000 charging points in Europe by 2025, 11,000 of which will be built by the VW brand itself. The German automaker made a not-so-subtle dig at the Federal German government for failing to make significant progress in infrastructure for electric mobility.

The VW Group itself intends to invest a total of 250 million euros in building up charging infrastructure. In this way, the Group intends to help electromobility achieve a rapid breakthrough. 11,000 of the charging points will be installed by the core VW brand at Volkswagen locations and at the approximately 3,000 VW dealers in larger cities. Around 4,000 charging points for employees will be allocated to the locations, many of which, according to the company, will be publically accessible.

“Charging infrastructure will increasingly become the crucial factor for the rapid breakthrough of e-mobility in Germany,” said Thomas Ulbrich, Member of the Board of Management responsible for e-mobility at the Volkswagen brand, at an event today in Berlin. “Charging an electric car must become just as easy and normal as charging a smartphone. This is why we need significantly more charging stations in public spaces and simple rules for the installation of private Wallboxes.”

The Volkswagen press release makes the company’s criticism of the federal government even clearer. “In Germany alone, the Coalition Agreement calls for more than 100,000 additional public charging points by 2020. Only a fraction of these charging points have already been established. Volkswagen is convinced that stronger commitment on the part of politicians is called for. The foundations for the rapid expansion of infrastructure need to be laid rapidly, for example by amendments to tenancy and construction law or the expansion of subsidies for charging infrastructure at public and private parking facilities.”

Volkswagen continues to rely on Ionity, which was founded together with other carmakers, for fast charging. By 2020, the joint venture is to manage 400 HPC sites across Europe with a total of 2,400 charging points. Many of the stations are currently under construction, and Ionity recently opened its 100th charging station.

In addition, Volkswagen also plans to build fast charging points in cities – but for the time being only at its headquarters in Wolfsburg. The 28 charging points, which are scheduled to go into operation in June, are part of the company’s gift on the occasion of the city’s 80th anniversary.

Ulbrich says that such actions must not remain an isolated case, and he want on to demand direct action from the German government. He said: “There is potential for e-mobility to become a genuine success story in Germany. If industry and politicians make a concerted effort, we can overcome the challenges of charging infrastructure very fast. Similarly, we can only master the technology-driven structural transformation in our industry by working together.” He went on to say that “Germany needs an e-mobility masterplan.”

Just yesterday, VW Board Member for Sales Jürgen Stackmann announced that more than 20,000 advance orders had already been placed for ID.3. The group had expected 30,000 reservations by the time of the IAA in September. The way things look now, this number will be reached much earlier.