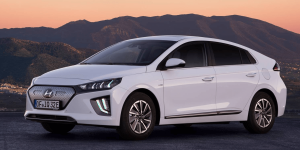 Hyundai has now released the prices for the revamped all-electric Ioniq, a few weeks after the hybrid and plug-in hybrid versions. The upgraded all-electric model will hit markets in the second half of this year.

The Ioniq Electric is priced in Germany at 34,900 euros,  in the UK, prices for the all-electric Ioniq start at £27,250. In the USA, the all-electric hatch-back is on sale initially in California, with prices starting at around $30,700 (around $20,700 in California after rebates) with a top price of just over $37,300, making it less expensive than the Nissan Leaf and the Chevy Bolt.

In May last year, Hyundai stopped taking orders for the previous all-electric Ioniq, due to battery shortages. A year later, the South Korean company released details of its revamped all-electric model without pricing details. Hyundai’s hybrid and plug-in hybrid versions were revealed in January this year, and cost less than the all-electric version, for example, the Hyundai Ioniq Hybrid is available in Germany from 25,800 euros, and the Ioniq Plug-in Hybrid from 32,000 euros – meaning the fully electric car will cost 1,600 euros more than its hybrid counterparts.

The new all-electric model, which will be hitting markets in the second half of this year, differs optically from its predecessor with the new headlights and above all the pattern on the closed radiator grille (which is reminiscent of the Kona Electric). The LED daytime running lights and the aluminium wheels have also been redesigned.

The most important new feature of the purely electric Ioniq is an increased battery capacity from 28 to 38.3 kWh, which should enable a WLTP range of 294 kilometres. In addition, the onboard charger of the electric motor will be upgraded from currently 6.6 to 7.2 kW. The AC charging process should take around six hours to 80 per cent.

At a DC charging station that delivers at least 100 kW, the charging process takes around 54 minutes to 80 per cent. The electric machine also receives a small power boost. Instead of the previous 88 kW, the new electric motor now delivers 100 kW.

The other upgrades mainly concern the connectivity and design of the model – these include enhanced Bluelink telematics services, improved safety and driver assistance systems and updated infotainment functions. In addition, the Ioniq has the Kona’s well-known deceleration function, which allows the driver to bring the car to a standstill without using the foot brake by holding the left paddle on the steering wheel. In addition, the regenerative braking system has been redesigned to adjust the recuperation intensity to the gradient or vehicles in front.