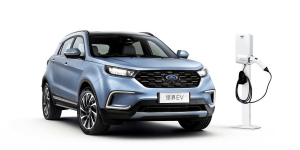 With the Territory EV, Ford China presented their first electric car for the Chinese market. The car is the electrified version of an SUV that is already being offered to Ford’s Chinese partner Jiangling – but under a different brand.

The electric Ford is based on the conventionally powered Yusheng S330 SUV, but has been redesigned by Ford for use as Territory EV. According to an announcement, the electric car will have a range of 360 kilometers and will be launched at the end of 2019.

An export to the USA or Europe is not planned. For Ford in China, the EV territory is of great importance, as it is the brand’s first all-electric car on the world’s largest electrical market. In the coming years, more than 30 Ford and Lincoln models are planned for China, including more than 10 New Energy Vehicles. A 48-volt hybrid and a PHEV are also planned for the territory.

While Ford is bringing a competitive electric car onto the market with the model in China, there is still no successor in sight for the Focus Electric in Europe. In April, the manufacturer announced its strategy for electrifying the European vehicle range and announced 16 electrified models. Instead, a portfolio of mild, full and plug-in hybrid vehicles is being introduced. In 2020 an SUV in the Mustang style will follow and in 2021 an electric transit.