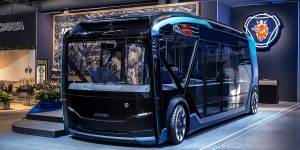 At the UITP Global Public Transport Summit in Stockholm, Scania presented an autonomous, all-electric concept vehicle with a modular design, that is suitable for a wide range of urban transport tasks.

This is how Scania describes the capabilities for the NXT concept: The vehicle could, for example, bring commuters to work in the morning (and back home in the evening), deliver goods during the day and be used as a vehicle for garbage collection at night. Various modules can be placed on the chassis – a passenger cabin or one of the transport modules, depending on the application.

This sounds similar to the concepts of the Mercedes Urbanetic or Rinspeed Snap, which were presented last year. But there is one big difference to the Scania concept car: while the drive unit forms a rigid platform on the other models, the front and rear drive modules on the NXT are not connected. This allows to operate modules with different wheelbases; after all, a delivery truck has different requirements than a passenger shuttle.

“NXT is a vision of the future for transport in cities,” says Scania CEO Henrik Henriksson. “Several of these technologies have yet to fully mature but for us it’s been important to actually build a concept vehicle to visibly and technically demonstrate ideas of what is within reach”. The will to make the concept ready for series production is there: the NXT market launch is set in 2030.

But it is also clear that to meet this date, a number of hurdles still have to be overcome for all-electric and autonomous vehicles. Henriksson, therefore, sees the NXT as an impetus to look at transport and vehicles differently and more sustainably in order to optimise traffic flows. “We at Scania can’t redraw the entire transport system for cities,” says the Swede. “What we can do is inspire change and that is the idea behind NXT – to think about transport and vehicles in a different and sustainable way.”

While Daimler did not add much discussion to the modular van after the presentation in the run-up to the IAA last year, Rinspeed wants to push the concept further. The Swiss company Snap Motion was founded in 2018 to further develop its Snap electric concept vehicle and prepare it for small series production.

Volkswagen on the electric offensive and buzzing (video)