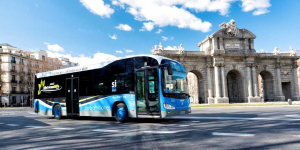 More so, Madrid’s EMT is topping up an existing order of 15 electric Irizar buses placed last year. However, the Spanish capital is spreading out the e-mobile offer. Its fleet will incorporate another BYD 15 electric buses once the order is fulfilled next year. The move must be seen in the light of the city’s ‘Madrid Central’ plan that came into force last year. The measure effectively bans all conventional cars from driving through the city centre and also includes zero emission duties for public transport operators.

In the case of Basque Vitoria, the project includes the implementation of charging infrastructure in cooperation with local Yarritu y LKS. More so, the 13 new electric buses are to integrate into the city’s Smart Electric Bus project BEI and both charge at the depot as well as along the way. They will electrify an entire route and the order includes seven 18-metre articulated buses and six 12-metre, that is tram electric buses. The ie type now features 10% more capacity and more efficient batteries according to Irizar.

While these are so far the biggest projects for Irizar in Spain, the manufacturer has taken the European markets in strides lately. A fleet of 43 electric buses from Irizar hit the roads in French Amiens for example. Keolis is operating the electric vehicles as part of the four new bus rapid transit (BRT) routes. Also, the Swiss town of Schaffhausen is expecting the supply 15 Irizar tram electric buses of type ie and associated charging infrastructure. Last but not least, public transit operator Rheinbahn in Düsseldorf, Germany, signed a contract for the delivery of ten electric buses by Irizar.

Last year, Irizar opened an e-mobility plant in the city of Aduna in northern Spain. So far it has a maximum capacity of 1,000 electric vehicles per annum.