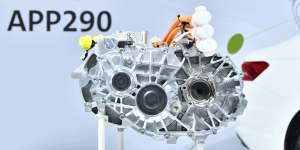 The parts that are now being produced in Tianjin for the German company’s PHEV platform MQB are the APP290 electric motor and the DQ400e hybrid transmission. Volkswagen is manufacturing 15 new energy vehicle models in China that will be offered on the MQB platform by 2020, before the EVs of the next decade are designed on the MEB platform.

The Tianjin Automatic Transmission Factory has been producing DSG dual clutch automatic transmissions for Chinese VW models since 2014. With the commissioning of new energy auto parts, the Tianjin automatic transmission plant will enter a new stage of development and build a new production plant. In the future, parts for the locally produced MEB vehicles will also be manufactured there.

Although the overall car market in China has recently declined slightly, the demand for New Energy Vehicles remains high – last year saw an increase of ten per cent to 1.3 million vehicles. For this year, the industry association expects 1.6 million New Energy Vehicles.

Volkswagen plans to manufacture a total of 22 million electric cars by 2030. As electrification progresses in the People’s Republic, VW is planning to build more than half of these EVs in China.