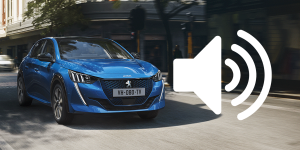 From July 1, 2019, all new types of electric and hybrid vehicles in the European Union (EU) must be equipped with an Acoustic Vehicle Alerting System (AVAS).

AVAS systems generate a sound when electric road vehicles are reversing or running below 20 km/h (about 12mph). The reason for limiting the speed is that at higher speeds the tyre noise usually drowns out the engine. If the combustion engine of a hybrid vehicle is running, the AVAS should not make any noise and vehicles that already emit a warning sound anyway when reversing do not have to produce any additional noise. According to the EU regulation, the AVAS must be equipped with an easily accessible switch for switching on and off and must be switched on automatically at the start.

In Germany, the federal government has already enabled subsidies of 100 euros for the instalment of the AVAS systems. This became valid with the extension of the German Umweltbonus (environmental grant) – which also comes into effect from 1 July.

When announcing the new regulations in the United Kingdom, Roads Minister Michael Ellis said that “This new requirement will give pedestrians added confidence when crossing the road.”

Not everybody agrees that the AVAS signalling is entirely practical. After studying noise levels of both electric and conventional engines, the Center Automotive Research (CAR) of the University of Duisburg-Essen found that new cars are in fact just as quiet as electric cars when in push-mode at low speeds since they only depend on the engine when accelerating again. In a special report for electrive.com, Christoph M. Schwarzer discovered that a sensible alternative to AVAS would be automatic emergency braking systems. In the case of hearing-impaired pedestrians, or those wearing headphones, emergency braking systems – much like the technology used in autonomous vehicles – may provide additional safety for all road vehicles, not just electric ones.