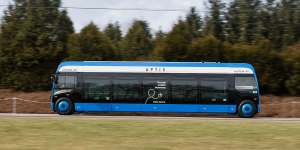 Alstom announces another order for its fully electric bus in tram design called Aptis. The south-western French port city of La Rochelle has ordered four units that are scheduled to go into operation at the beginning of 2020.

In La Rochelle, the Alstom electric buses will be in circulation on the Illico 4 BRT (Bus Rapid Transit) line from the beginning of 2020. Twelve metres long and equipped with three doors, the Aptis buses will reinforce the fleet of the La Rochelle transport operator RTCR.

Forsee Power is supplying the lithium-ion batteries based on NMC chemistry, giving the Aptis a range of 150 to more than 250 km, depending on the battery pack configuration. In La Rochelle, the e-buses are designed for slow charging at night at the depot. Aptis is also available for occasional recharging at the end of each line, using ground-based charging solutions (SRS) or charging through the top (pantograph).

Apart from La Rochelle, Alstom has sold the Aptis model to Strasbourg transport operator> CTS as well as RATP in Paris and other transit authorities in France.

Once testing finishes, Alstom’s Hangenbieten site will begin manufacturing the end modules; the manufacture of the central passenger module, final assembly and tests will be carried out at the Reichshoffen site. This plan will enable serial production from the third quarter of 2019. Five other Alstom sites in France are involved in the design and manufacture of Aptis: Saint-Ouen for the system integration, Tarbes for the traction, Ornans for the motors and Villeurbanne for the electronic components of the traction chain. Finally, Alstom’s site in Vitrolles is developing one of the charging solutions (SRS).

Alstom will deliver all Aptis electric buses in 2020.