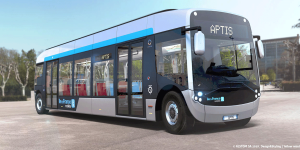 Alstom announced another order for its fully electric Aptis bus with a tram design. After the Strasbourg transport company CTS had ordered twelve units in March, the Paris public transport operator RATP is now ordering 50 units of the electric bus.

The Aptis design is based on trams. It is characterised by four steerable wheels, which allow a low, flat floor in the elongated centre section. According to Alstom, the model also offers 25 per cent more window area than conventional buses. For the Paris metropolitan region, 12 meter long Aptis models were ordered, which have three doors and are to be loaded overnight in the depot.

Forsee Power is supplying the lithium-ion batteries based on NMC chemistry. Both the charging speed and the number of modules should be selectable for public transport operators. As of summer 2018, the Aptis has been able to cover between 150 and 250 km, depending on the battery pack configuration. Alstom intends to lease the batteries to public transport operators in order to cushion the financial burden for customers when purchasing the electric buses. Nothing is known about the capacity or range the fleet will have for Paris.

The fact is, however, that the order from RATP (Régie Autonome des Transports Parisiens) is part of the ambitious plan to procure up to 800 electric buses by 2024. The budget of EUR 400 million earmarked for this purpose will go in equal parts of EUR 133 million each to the manufacturers Heuliez Bus, Bolloré and Alstom. The sums are cover amounts which can be used depending on the completion of the deliveries. The project will be financed by Île-de-France Mobilités, the organisation responsible for organising public transport in the Paris area.

“We are very proud to be involved in making the Île-de-France region a global reference in clean urban road transport,” said Jean-Baptiste Eyméoud, President of Alstom France. The award is crucial for the Aptis bus model. Production and test runs will be carried out at the two Alstom sites in Alsace – Hangenbieten and Reichshoffen. According to Alstom, series production can start there in the third quarter of 2019.

Since the prototype was presented in March 2017, four Aptis test vehicles have covered more than 40,000 kilometers under real operating conditions, according to Alstom. The model also won the 2017 Innovation Award at the Busworld trade fair. In January 2019, it also received the official certificate that more than 60 percent of the value added in France is generated during the construction of the electric bus. Since last September, the Aptis has also been included in the register of CATP, the French centre for the procurement of public transport. This referencing allows member authorities to order Aptis models directly and easily through CATP without the need for long and costly procedures.