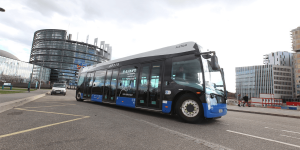 Alstom has received its first order for their fully electric Aptis bus in tram design. The Strasbourg transport company CTS has ordered a dozen of the 12-metre buses, which have three doors and are to be charged overnight in the depot.

The Aptis electric bus design is inspired by trams, offering 25 per cent more window area than conventional buses. The model is characterised by only four steerable wheels, which allow a low, flat floor in the elongated central section.

Forsee Power is supplying the lithium-ion batteries based on NMC chemistry. Public transport operators should have a choice both in terms of charging speed and the number of modules. As of summer 2018, the Aptis can cover between 150 and more than 250 km, depending on the battery pack configuration. Alstom intends to lease the batteries to public transport operators in order to cushion the financial burden for customers when purchasing electric buses. The goal is to have a total cost equivalent to standard diesel buses.

The only known fact about the twelve buses for the French city of Strasbourg that borders Germany, is that they are designed for night-time charging in the depot. However, Alstom explicitly states that it will also create the conditions for ground charging or OppCharge via an inverted current collector if required.

Since the prototype was presented in March 2017, four Aptis test vehicles have covered more than 40,000 kilometres under real operating conditions, according to Alstom. The model also won the 2017 Innovation Prize at the Busworld trade fair. In January 2019, the model also received official certification, Origine France Garantie, that more than 60 per cent of the value added during the construction of the electric bus is generated in France.