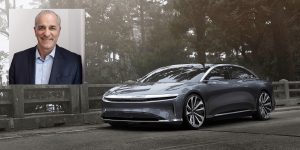 Firstly, just days ago, news broke about the surprising departure of Tesla production manager Peter Hochholdinger (photo left) who is moving to Lucid Motors where he is supposed to create the next production miracle – but more about that shortly.

Today, news of the second surprise exit leaked – Tesla’s European head Jan Oehmicke is also leaving the Californian carmaker. According to sources cited by Electrek, a successor for Oehmicke has already been found: Sascha Zahnd, Vice President Global Supply Chain at Tesla, is to replace Oehmicke as head of Europe. The Swiss Zahnd has been with Tesla since 2016, having previously worked for the Swatch Group and Ikea.

Oehmicke had only been responsible for the European business of the Californian electric car manufacturer for barely a year, since July 2018. Before that, the finance and sales expert had been working for BMW in various positions for almost 20 years, most recently as CEO of BMW Financial Services in France. According to German business magazine Wirtschafts Woche, over the past few months at Tesla, Oehmicke has increasingly clashed with company boss Elon Musk about the market launch of the Model 3 in Europe. Tesla has made no comment on the matter.

At the time of publication, Jan Oehmicke was still listed as working for Tesla on his LinkedIn profile.

Not so with his German colleague Peter Hochholdinger, whose appointment at Lucid Motors has already been officially announced: Hochholdinger is now already working for Lucid Motors as Vice President of Manufacturing.

Lucid Motors was founded in 2007 and is based in Newark, California, just like Tesla. In mid-2017 there were rumours of talks about a possible takeover of Lucid Motors by Ford. In September 2018, it became known that the Saudi Arabian sovereign wealth fund would invest over a billion dollars in Lucid Motors. The electric car startup wanted to start building its factory in Arizona this spring. Production of the first model – the Lucid Air – is scheduled to begin there at the end of 2020. The company had already presented the prototype at the end of 2016.

With his new appointment, Jan Hochholdinger now has to do at Lucid what he already did best at Audi and later at Tesla: ramp up production. According to Lucid, 10,000 Air electric sedans were initially scheduled to roll off the production line at the new plant in Arizona this year.

Due to the delay in raising funds, Lucid Motors will only now be able to set up production at 60,000 units per year. An excellent challenge for Peter Hochholdinger, who, according to many observers, ultimately saved Tesla – by setting up the production of Model 3. It remains to be seen whether he will succeed in helping Lucid, another newcomer, to make its debut the production of luxury cars. His new boss has already showered the new production manager with advance praise: “We are delighted to welcome Peter to the Lucid team,” said Peter Rawlinson. “Peter’s extensive experience and proven leadership in premium vehicle construction will prove invaluable.”

Tesla’s Model 3 was the best-selling electric car globally in 2018, and yet, the executives responsible for producing the vehicle and selling it throughout Europe have left.

Update 03.07.2019: The newest Tesla employee to jump ship is now Steve MacManus – according to media reports, Steve MacManus, vice president of interior and exterior engineering at Tesla, has departed the company. He declined to comment as to why he left or where he was headed, as did a Tesla spokesperson. It has been confirmed that MacManus’ email address at the company has been deactivated.