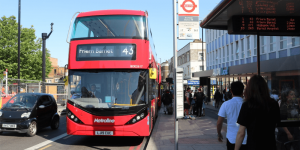 Together with their British partner ADL, BYD has introduced the first of 37 new all-electric Enviro400EV double-decker buses. The first five buses have gone into service in London on Line 43.

The Enviro400EV is based on the well-known Enviro200EV, but is larger. The new aluminium body is 10.9 metres long, 4.3 metres high and 2.55 metres wide. The bus is powered by wheel hub motors. The iron phosphate batteries have a capacity of up to 382 kWh, which enables a range of 250 kilometres, according to BYD.

The bus was tailored to the requirements of the London bus operator Metroline. On the level there are 24 seats, on the upper deck 43 seats. “The launch of the new electric buses on Route 43 is a triumph for both Metroline and London,” said Adrian Jones, Engineering Director at Metroline. “In close cooperation with the engineers at BYD and ADL, we have developed these new buses, where we have learned from our tests with their prototypes.

Line 43, on which the vehicles will initially be used, runs from Friern Barnet to London Bridge – a total distance of nine miles. And of course the new electric double-deckers are painted in the iconic red.