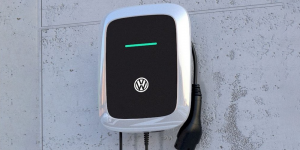 Volkswagen has established a joint venture with its China partners JAC and FAW for the development, production and sale of charging infrastructure. This involves wall boxes as well as the installation, maintenance and operation of public charging points.

News of the new joint venture was leaked in a report from the online news service qichacha.com, which was picked up by Chinese media. The joint venture will apparently be based in Changzhou and will start with a capital of 812 million yuan (about 105 million euros).

While Volkswagen China and FAW will each contribute 244 million yuan (around 31.5 million euros), JAC Motors will contribute 81.2 million yuan (10.5 million euros). Jiangsu Wanbang Dehe, a Changzhou-based producer of charging infrastructure, will also be named as the fourth company to participate in the joint venture. Wei-Ming Soh, Executive Vice President of Volkswagen, is now responsible for the new joint venture.

Within two years, Volkswagen plans to launch more than 30 new models with electric and plug-in hybrid drives on the Chinese market, half of which will be produced locally and the other half imported. The Group’s goal is to deliver around 400,000 electrified vehicles by 2020 and increase this figure to 1.5 million by 2025. By 2022, the Group and its joint venture partners SAIC, FAW and JAC are prepared to invest 15 billion euros in the future fields of electric cars, autonomous driving, digitization and new mobility services.

Volkswagen’s activities in China are correspondingly diverse and range from the establishment of plants and investment ambitions to plans for a fast-charging network. For example, the joint venture between Volkswagen and JAC plans to build an electric car plant in Hefei, China, for the equivalent of 674 million euros. The planned production capacity: around 100,000 purely electric cars per year. The company’s first electric model, the E20X, is scheduled to be launched this year. And the ties between Volkswagen and JAC could become even closer: Just recently, Volkswagen was reportedly considering buying a large stake in the Chinese joint venture partner.

Until now, VW has primarily based its China offensive on its long-standing partnerships with FAW and SAIC. Among other things, the German carmaking giant is currently setting up SAIC, an electric car plant in Shanghai, in which mainly Audi vehicles are to roll off the assembly line from 2020. In cooperation with FAW and local partners, the establishment of a Chinese fast-charging network is a whole new field. The planned joint venture will apparently have a starting capital of 1 billion yuan (around 130 million euros).