Electromobility continues to gain momentum globally, as the Center of Automotive Management (CAM) states in its latest industry study. In the second quarter, sales of BEVs and PHEVs increased in many places against the overall trend.

For the study, the team at the Center of Automotive Management (CAM) headed by Stefan Bratzel compiled the new registration figures for the most important electrified automotive markets in the first and second quarters of 2019. The survey covers China, the USA, Norway, Germany, Great Britain, France and the Netherlands.

One of the core statements of the studies will not change in the foreseeable future: China remains the number one electric car market – and that is unchallenged. But there is a lot of movement behind this compared to the first quarter. Measured by the cumulative approvals of BEV and PHEV, Germany has overtaken Norway and is thus the third-largest PEV market in the world, when measured in absolute sales and not plug-in cars per populace of course. In France, PEV registrations have also risen sharply, with the country displacing Great Britain from fifth place. 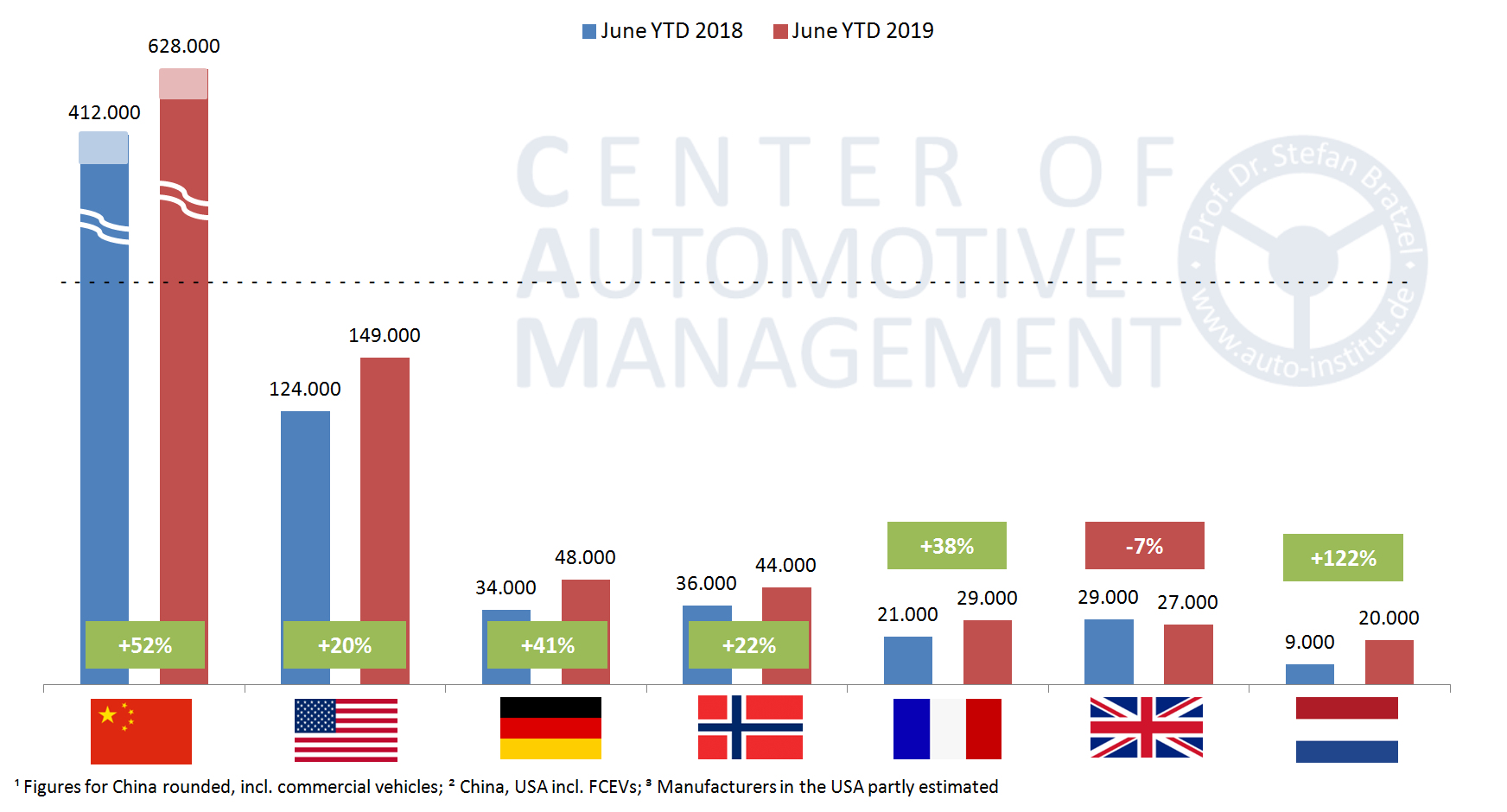 The exchange of places behind this between Germany and Norway is interesting from two points of view: the German PEV market is growing steadily (compared with 2018 from 34,000 to 48,000 vehicles, an increase of 41 per cent). Since the overall market is stagnating (only a plus of 0.5 per cent), PEV growth is impressive. Norway is also continuing to grow, but its speed has slowed somewhat: the figures have risen by 22 per cent to 44,000 vehicles. 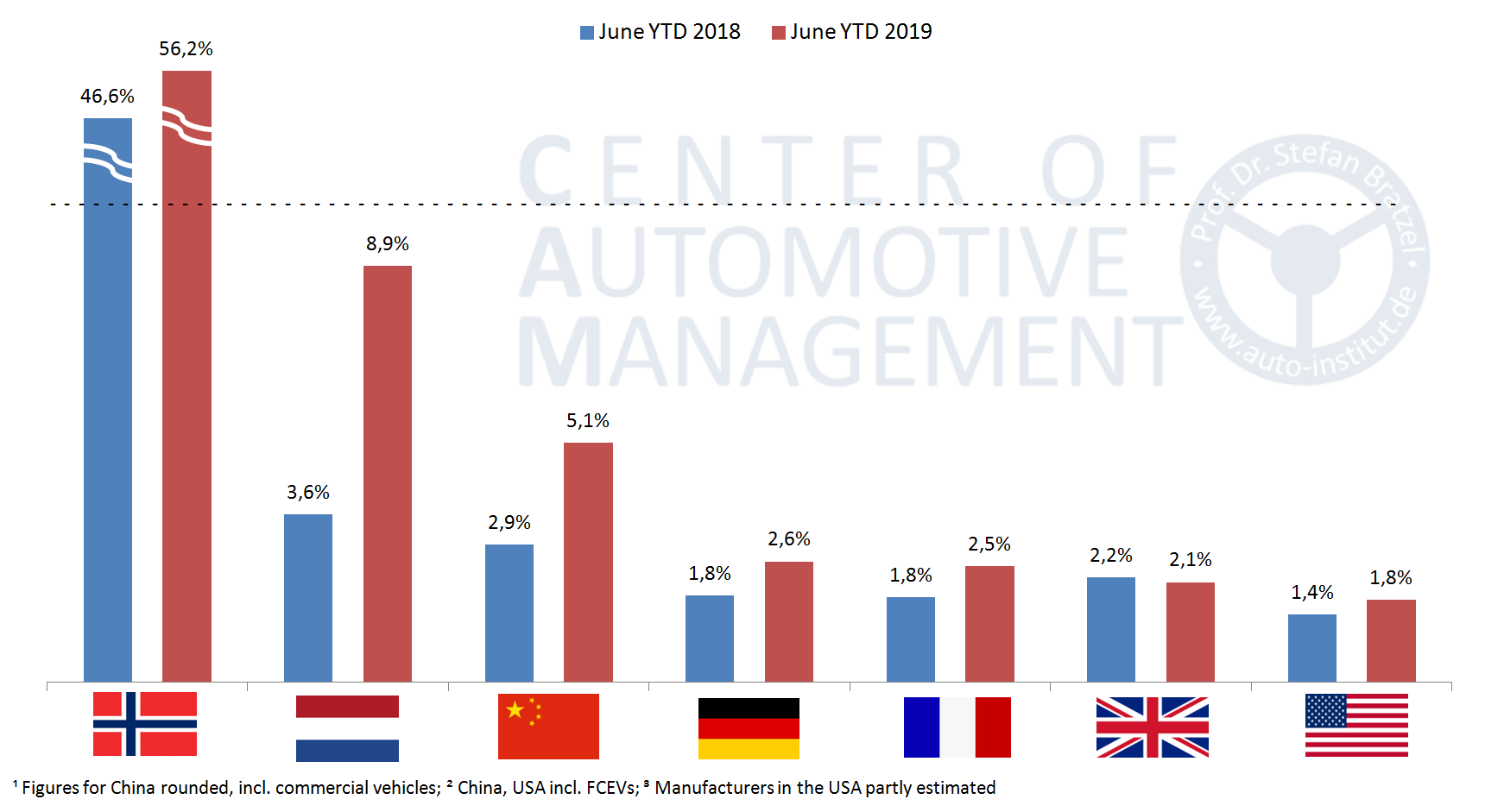 The second interesting point is that while Norway is slowing in growth, Germany still has to catch up with further market shares. In the first quarter, 61 per cent of new registrations in Norway were PEVs. The Scandinavians were not quite able to maintain this record level, but with 56.2 per cent in the first half of the year, such a market share is still unmatched internationally. Although Germany can also look forward to growth, it’s PEV market share is low at 2.6 per cent (2018: 1.8 per cent). So the joy of having overtaken Norway as the third-largest market has a pale aftertaste.

In addition, the diesel market in Germany has continued to stabilize. According to CAM, diesel engines accounted for 33 per cent of new registrations in the first half of the year – up from 32.1 per cent in 2018. The increase in PEV registrations in Germany is mainly due to battery-electric cars. These have increased by 80 per cent to 31,000 vehicles, while the plug-in hybrids with 16,500 vehicles have even lost 0.9 per cent.

According to the CAM, the exchange of places between France and Great Britain can be attributed to two trends: In France, PEV registrations increased by 38 per cent to 29,000 vehicles – of which 73% are BEV and 27% PHEV. The second cause is Great Britain itself: In the Brexit environment, the entire car market there lost 3.4 per cent, while PEVs were hit even harder by the poor mood with a loss of 7 per cent. The PEV market share in Great Britain fell from 2.2 to 2.1 per cent.

There are completely different figures from the Netherlands: Electric mobility is growing rapidly there. Although the overall market lost 10.4 per cent in the first half of the year, the Dutch bought 20,000 PEVs – an increase of 122 per cent! Of the 20,000 vehicles, 17,400 were BEVs, the CAM attributes this growth primarily to the introduction of the Tesla Model 3. The influence on the overall market is also enormous: the market share of plug-in electric cars has shot up from 3.6 to 8.9 per cent compared to 2018.

“Electric mobility is about to make a breakthrough in the core markets of the automotive industry, and we expect this to happen from 2020,” says Bratzel about the study results. It is remarkable that electrified vehicle sales are already able to cope with a generally declining overall market. The momentum is based on the pure electric vehicles market, while the sales figures for plug-in hybrids are currently declining.

Israeli startup Ree puts the motor in the wheel