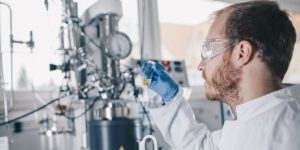 The technology developed by German company Hydrogenious LOHC uses heat transfer oil to bind hydrogen and thus enables unpressurised storage at ambient temperature. In addition, it enables a loading capacity that is three times higher than that of conventional pressure vessels. In the first step, the partners have developed systems with a hydrogen capacity of 5 and 12 tons per day.

As the LOHC technology uses existing infrastructure for conventional fuels (such as gas pipelines), it makes it possible, according to the project partners, to transport large quantities of green hydrogen, for example from Scandinavian wind farms to Central Europe. “We are very pleased to have gained such important plant engineering players for this cooperation,” says Daniel Teichmann, CEO of Hydrogenious LOHC Technologies.

As the developer of the LOHC technology, Hydrogenious LOHC Technologies brings its expertise in this core process to the partnership. Netherlands-based Frames Group designs and builds renewable energy solutions, oil and gas processing plants and will contribute the hydrogen hydrogenation plant to the project. German company MAN ES will activate their experience in the development and manufacture of reactor systems for chemical and petrochemical applications. The company will supply the reactor and the associated steam generator plant for the projects.

“We strongly believe that the global goal to build a climate-neutral economy largely depends on the future use of green hydrogen and other gases produced from renewable energy”, says Dr Uwe Lauber, CEO of MAN Energy Solutions. “Hydrogen will play a crucial role in the decarbonisation of those sectors that cannot be electrified directly. The LOHC technology is a game-changing and powerful innovation by a great company and this partnership is an important step to further build our profile with regards to a future hydrogen economy.”

Electric car battery line to be built in Slovakia