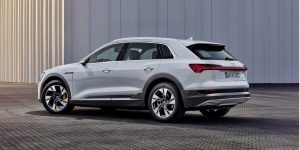 Audi has announced a new drive version for its e-tron electric SUV with reduced performance data. The e-tron 50 quattro still has two electric motors, but features a smaller battery.

The Audi e-tron 50 quattro with 230 kW output and 71 kWh battery will be available for the European market in the fourth quarter of 2019. In the announcement, Audi speaks of a range of “more than 300 kilometres in the WLTP cycle”. The new entry-level model is set to go on sale for less than 70,000 euros.

Since the net price is thus less than 60,000 euros, the e-tron 50 quattro meets the requirements for the German environmental bonus. Of course, the car is not yet on the list of eligible vehicles, which was last updated on July 31.

We remember: Audi sells the model available so far under the name e-tron 55 quattro. This model has an output of 300 kW, a 95 kWh battery and can accelerate to 100 km/h in less than six seconds. Audi specifies the standard range here as 400 kilometres.

The most exciting feature is the new battery: it consists of 324 prismatic cells combined into 27 modules in the e-tron 50 quattro. They store 71 kWh of energy. Audi does not go into the details of the drive, but it is to assume that these are the same electric motors from the Györ plant. Only these receive less power due to the new battery. The fact that the maximum charging power of 120 kW is lower than in the more powerful model only supports this reading.

According to Audi, the powertrain has been reapplied to increase efficiency. There have also been several changes to the e-tron’s high-voltage system. The lower total weight, which also reduces driving resistance, contributes to improved efficiency, as does the powerful thermal management system with its standard heat pump. The lower total weight is also due to the battery. The 95-kWh version alone weighs 700 kilograms – Audi does not mention the value for the new battery.

With AC charging, the familiar 11 kW charging power is maintained, with a charging time of seven hours. Later, a second charger will be available as an option to increase the AC charging capacity to 22 kW – but Audi still does not mention a time for this. As already mentioned, the DC charging capacity drops by 30 kW to 120 kW. In the press release, Audi writes that the electric SUV will be “ready for the next long-distance stage” in about half an hour, probably the usual charge of 80 per cent.

The brake system remains unchanged. The disc brakes are only used from a deceleration of 0.3g, before the electric motors complete the deceleration as recuperation. According to Audi, this is the case with more than 90 per cent of all braking processes.

At first glance, there are no optical changes. As can be seen in the published pictures, the e-tron 50 quattro with the camera exterior mirrors can also be ordered.