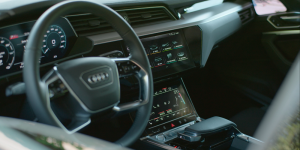 Drivers of the Audi e-Tron have been confused by the fully-electric SUV’s screen display: it unhelpfully shows the closest petrol stations and prices but not charging points.

It appears that these mistakes are the growing pains of ICE carmakers in their awkward transition to electric mobility. According to the Tweets that followed, drivers of electric VW and the BMW i3 have been confronted with similar faux-pas. The below tweet shows: on the e-Tron digital display, Aral petrol stations are shown, but not Ionity charging points. When the system starts up new, the screen happily says “data updated”. One Twitter user suggested this was perhaps due to “fossil separation anxiety”.