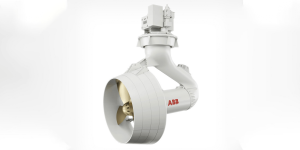 ABB has entered a new market segment with its Azipod electric marine propulsion system: The technology group will install the electric propulsion for the first time on board two container cargo ships.

The two ships, to be delivered to Oldendorff Carriers by the Chinese shipyard Chengxi in 2021, will each be equipped with two 1.9 MW Azipod units. These are propeller nacelles mounted under the ship – ABB is one of the six largest manufacturers of such propeller nacelles with the Azipod system. These can be rotated 360 degrees and thus increase manoeuvrability.

Each nacelle has an electric motor. However, it does not receive its power from a high-voltage accumulator, but rather from a serial hybrid: the ship’s diesel engine drives a generator that generates the necessary electricity. ABB also supplies the generators, bow thruster motors, transformers, control panels and the energy management system.

The two ships are self-discharging dry cargo handling ships capable of carrying up to 21,500 tons. The self-unloading ships can unload cargo via a built-in conveyor system and without the assistance of shore equipment or personnel. “The choice of Azipod electric propulsion system has reduced the investment costs dramatically as the vessels are already equipped with high power generation required for self-unloading/loading cargo handling,” says Jan Henneberg, Newbuilding Manager at Oldendorff Carriers. “These shuttle vessels must perform reliably over an extended period at maximum efficiency, and need to be especially maneuverable in shallow waters.”

With a fleet of around 700 ships, Oldendorff Carriers is Germany’s largest operator of bulk carriers. Around 95 per cent of Oldendorff’s own fleet consists of “eco” newly constructed ships delivered since 2014, which are specially designed for low fuel consumption and lower CO2 emissions.