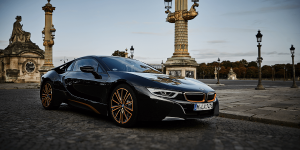 The company writes: “The Ultimate Sophisto Edition will escort the world’s most successful plug-in hybrid sports car since its launch in 2014 onto the finishing straight; production of the i8 will come to an end, as scheduled, in April 2020.” However, BMW does not comment on a possible successor.

Rumour has it that a new i8 will come onto the market in 2022 – so there is a threat of a production break of almost two years. This will continue to be a plug-in hybrid, but with more powerful engines. The electric motor is to be increased to 150 kW and the combustion engine to 250 kW. According to a report in German media at the beginning of August, however, a fully electric i8M with 500 kW is said to have been cancelled – switching to a battery-electric drive would have resulted in costly conversions.

The special model of the i8, limited to 200 units (available as a coupé and roadster), features a special paint finish, and, for the first time, the accents will be in the “E-Copper” colour. The 20-inch bicolour alloy wheels – in black and E-Copper – are also new for this special model. In addition, the rear lights of the i8 are now made of clear glass.

The i3s in the RoadStyle edition also has 20-inch rims but in the narrow version typical of i3. Here, too, the accents are painted in E-Copper (the inserts of the double kidneys, the air control elements in the front apron and the accent surfaces of the side skirts), while the rest of the car is painted in “Fluid Black”. The interior of the i3’s “limited edition” of less than 1,000 units is based on the “Suite” equipment, but is extended here by a special natural leather finish and the instrument panel in “dark matt oak”.

BMW does not mention prices for both special models in the press release.