The Corsa-e is equipped with a three-phase 11 kW on-board charger and can charge up to 100 kW DC. Now, Opel has now provided further information on charging cables, the myOpel app and the charge pass Charge My Car.

A brief review: In Germany, the Corsa-e is equipped with an 11 kW onboard charger as standard from the Edition version onwards. The newcomer can also be ordered with a single-phase 7.4 kW on-board charger for countries in which a three-phase high-voltage connection is less common in households than, for example, in Germany. This is also part of the standard equipment of the Corsa-e Selection entry-level version in Germany, which can be ordered from 29,900 euros. In addition, the Corsa-e is equipped as standard in every version so that fast charging columns of up to 100 kW can be used.

However, the Corsa-e is delivered from the factory only with a Mode 2 charging cable for charging at the household socket (and the appropriate plug depending on the country). Opel states the power here at 1.8 kW – but with a 50 kWh battery, the charging process can take a very long time.

For charging on public AC columns or a wallbox without a permanently installed cable, Opel optionally offers various Mode 3 cables “which are optimally matched to the on-board chargers offered”. With the 11-kW charger, electricity can be charged for 100 kilometres in about 90 minutes, a full charge (e.g. on your own wallbox overnight) takes just over five hours. The cables are each six meters long so that the charging station can be reached even if you cannot park right next to it. 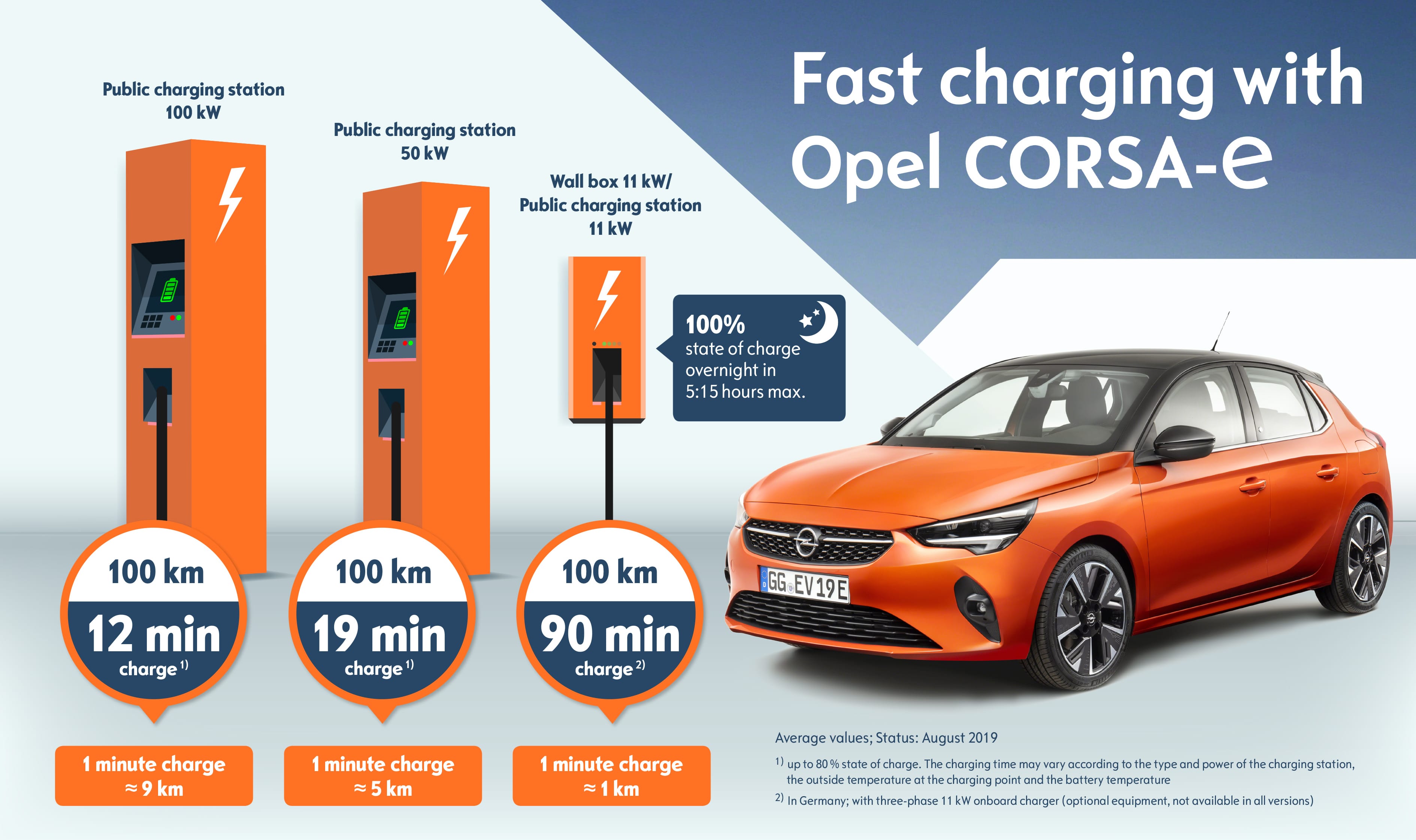 If drivers do not want to transport two charging cables, they can use the “universal charging cable”, which combines the functions of the Mode 2 and Mode 3 cables as a mobile charging station. With different adapters, this cable can be connected to different sockets or charging stations – similar to the JuiceBooster or NRG Kick. “The “universal charging cable” is thus ideal for customers who normally charge their car overnight at home but also want to occasionally make longer trips and then must “fill up” on the road,” writes Opel.

While Hyundai and Kia, for example, only added an app connection to their electric cars later on, the Corsa-e will be operable from the outside via the myOpel app right from the start. Then it will be possible to call up the range and charging status on the smartphone or operate the charging time on the wallbox or the auxiliary heating/air conditioning.

Free2Move’s services are optional, such as a charging pass that enables access to over 110,000 charging points in Europe. With Charge My Car, there is also a journey planner that takes into account the location of the charging stations along the route and calculates the best route – taking into account factors such as the distance to the charging point, the charging speed and the charging price. The route defined in the smartphone app can also be sent to the car’s navigation system.

Further services for Opel’s electric vehicles are to follow in the coming months. Prices for the optional charging cables and the Free2Move services have not yet been quoted by Opel.

Update 02 April 2020: In the meantime, Opel has announced the prices for the ‘Charge My Car’ service package. Since the service for drivers of the all-electric Opel Corsa-e and Grandland X plug-in hybrid is based on the PSA Free2Move Services and also uses its app, the price is also the same: 4.99 euros per month. All services of the app can be used, such as the charging point finder or intelligent route guidance. In addition, the finder offers not only the exact address but also information on whether the charging point is free or occupied at the time of the request.

The monthly subscription is also necessary in order to be able to start a charging process via the app (or the charging card sent to you subsequently). There are further costs involved here, but they are somewhat confusing. Although the service offers access to 140,000 charging points (and thus 30,000 more than when it was announced in September 2019), the costs differ, sometimes massively, depending on the charging point operator. As a random sample from our colleagues at electrive.net has shown, E.ON charges a flat rate of around €25.20 per charging process for triple chargers. Fastned charges an initial fee of 60 cents, after which the kilowatt hour costs 65 cents/kWh – instead of €0.59/kWh without initial fee at Fastned directly. With Ionity likewise 0.60 € starting fee becomes due, afterwards 0.86 €/kWh – thus Free2Move services lies still over the much criticized ad-hoc price of Ionity with 0.79 €/kWh.

But it is also possible in the other direction: AC charging in Hamburg costs 0.27 €/kWh via Free2Move Services after the 0.60 € starting fee. Without a contract, charging there would also cost the customer 0.27 €/kWh, but with a fixed fee of 1.73 € plus 19 per cent on the total amount.

Opel has not yet answered an inquiry from electrive regarding the tariff policy.