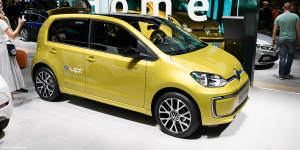 Before its debut at the IAA, VW has announced the price of the new e-Up and lists it in Germany for 21,975 euros. This makes the new e-Up, with a range of up to 260 km cheaper than its predecessor.

VW already lowered the price of the e-Up from 26,900 to 22,975 euros at the end of last year. According to VW, the renewed price reduction was realised through the economies of scale of mass production. In Germany, purchasers of the e-Up will receive an environmental bonus of €2,000 from the state and a gross subsidy of €2,380 from Volkswagen, bringing the purchase price down to €17,595.

In addition, there is a special leasing offer in Germany for the start of advance sales: from 18 September to 31 October 2019, e-up can be leased for 159 euros a month without special payment.

There are no surprises with the technical data: The new range of 260 kilometres was already available in July on the websites of the Dutch and Norwegian importers. As VW has now confirmed, new battery cells now enable a net capacity of 32.3 kWh (instead of 18.7 kWh). VW guarantees the battery for eight years or 160,000 kilometres.

The DC charging capacity remains at 40 kW, the charging time to 80 per cent thus at 60 minutes. Since the e-Up shares the technology with the already introduced sister models Skoda Citigo e iV and Seat Mii electric, we may assume that the Ee-Up will also take over their 7.2 kW onboard chargers (instead of the previous 3.6 kW), although VW has not mentioned this specifically in their press release.

The power of the electric motor remains at 61 kW, but the top speed also remains the same at 130 km/h, although there was some anticipation that there might have been an increase to 150 km/h here. Nevertheless, it seems VW has assumed that the sales volume will “increase significantly” compared to the predecessor with no concrete details of their expectations.

The standard features of the revised e-Up include an air conditioning system, a DAB radio with Bluetooth interface, a lane departure warning system and the connection to the “maps + more” app. This can be used, among other things, to control charging via the smartphone and to activate the standard stationary air-conditioning system.

Prices for territories outside of Germany have not yet been released.