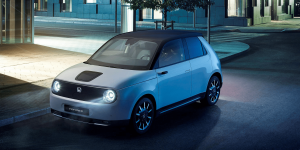 Without the price advantage of EUR 4,380, the picture is different: with EUR 33,850 or EUR 36,850 for an electric car with a range of 220 kilometres, the Honda e is one of the more expensive electric compact cars. It is on a par with the Mini Cooper SE (starting at 32,500 euros), but has an output of 135 kW and a longer range of up to 270 kilometres. The PSA models Peugeot e-208 and Opel Corsa-e offer more range and performance for less money, but not the retro design of the Honda or details such as the camera exterior mirrors and the display armada in the interior.

Order books for the Honda e will be opened this month in selected European countries. “Those customers that have already placed a reservation will today receive an invitation to contact their local dealer to secure an order,” said Honda. The first deliveries to customers in Germany, Norway, France and the UK will take place in summer 2020, according to Honda. To date, the manufacturer has received more than 40,000 expressions of interest for the compact electric car. It is still open that many reservations Honda can also convert into binding orders – many interested parties may have hoped for somewhat lower prices.

But Honda remains optimistic. “Since the prototype was presented, we have experienced great enthusiasm for the car throughout the region,” says Jean-Marc Streng, General Manager of the Automotive Division of Honda Motor Europe.

In addition to the production version of the Honda e, the Japanese also presented a new charging solution in Frankfurt. The Honda Power Charger is available as a wall box or charging station. It offers the usual charging capacities (7.4 kW single-phase or 22 kW three-phase), but is primarily intended to feature a number of control and safety functions. The charging station attempts to restart the charging process up to five times if it is interrupted. In addition, the owner can regulate the maximum charge quantity on the basis of a solar photovoltaic system, a home battery or a heat pump.

While Honda e is currently making its first public appearance, Tom Gardner, Senior Vice President of Honda Motor Europe, took the opportunity to confirm details of the brand’s next important launch. According to the announcement, Honda will launch the next generation of Jazz next year. In Europe, the model will be available exclusively with hybrid drive.