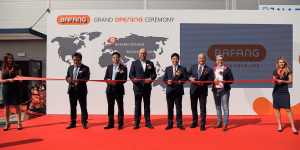 Bafang, the Chinese manufacturer of motors and other components for e-bikes, has opened its first production facility outside of China in Wroclaw, Poland. The new plant should allow a faster supply for European customers.

Bafang will produce its bestselling mid-drive systems, the M400, M420 and M300 here on two assembly lines in the future. In the first year, Bafang intends to provide 150,000 units and increase annual production to 600,000 units within three years. Bafang has yet to decide on the production of hub motors for electric bikes.

Initially, 50 employees will work in the new plant with a floor space of 6,000 square metres (5,200 square meters of which will be used for production). Bafang estimates the investment at 16 million euros. A network of local suppliers is currently being set up to reduce deliveries from Asia. More so, Bafang may find what it is looking for in the immediate vicinity: Companies such as LG Chem and Lapp Kabel are also located in “Panattoni Park Wroclaw” as well as Amazon and Schenker for Logistics.

By manufacturing in Europe, Bafang aims above all to shorten delivery times for its customers. “Generally, the lead time of Asian purchase from order to delivery is about six months. Products ex-Poland will see a shortened lead time to four months,” said Bafang CEO Qinghua Wang. “We’re already planning a gradual reduction to two months in the future,” he said, explaining that their customers tell them that this is often the weakest point in the current e-bike market.

According to Bafang, the location was chosen primarily because of its favourable location between two major motorways leading to Germany and the Czech Republic. The search for a suitable production site began as early as 2015. Bafang, which is based in Suzhou near Shanghai, has been active in Europe since 2004 – a sales and distribution office was opened in the Netherlands in 2011 and one in Germany in 2016.