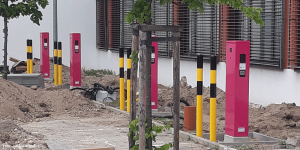 To reach its climate goals, Germany needs a massive transport turnaround to change how traffic looks like latest by 2030. Now the Federal Ministry of Transport is planning to invest up to 75 billion euros not only in railways but also electromobility.

Seven million electric cars, half of all buses running with zero emissions, kilometres of cycle lanes – this is the vision of a draft paper Sueddeutsche Zeitung has unearthed ahead of the climate cabinet’s decisive meeting on 20 September. The planned billion-euro infrastructure fund will benefit not only the railways (with about 20Bn euros) but also electric transport on the roads.

For this, the government is thinking incentives as it may double the federal share of the environmental bonus to 4,000 euros for electric cars up to a list price of 30,000 euros – this should stimulate the market for small electric vehicles. Also, electric cabs may then get funding of 8,000 euros, while the second-hand market for electric cars could be encouraged with 500 euros. Besides, by 2030 every second bus in the country is to run on electricity.

Back to the goal of at least seven million electric cars driving through Germany by 2030 – this needs corresponding charging infrastructure and the government is aiming for charging opportunities for up to 10 million EVs. Still, the draft lacks concrete measures here. Note though that on the latest count by BDEW (a German business organisation for the energy and water industry) there were 20,650 public charge points available in Germany. Enough for the few electric cars driving around so far – at the end of August, BAFA had received 135,193 applications for the environmental bonus of which 89,864 were for battery-electric vehicles, 45,236 for plug-in hybrids and 93 for fuel cell vehicles. It seems a long way to go.

However, the ministry is not exclusively focusing on electric drives in car traffic: a portion of the billion-euro budget not mentioned in the report is to be used to further research alternative fuels, including for freight transport.

Due to this, and because it is still a conservative government, the Green party has already asked for more. Parliamentarians want to ban sales of combustion engine vehicles from 2030 and to discontinue subsidies for diesel and other fossil fuels gradually. At the same time, the Greens envision a 5,000-euro “Umweltprämie” (plug-in grant) and a climate bonus to be paid to people who cause less CO2 emissions.

Germany aims to cut transport emissions 40 per cent (compared to 1990 levels) by 2030 but is off-target to date. Chancellor Angela Merkel considers this to be “a herculean task for both you and us,” in her address to the auto industry during her opening speech at the IAA in Frankfurt.