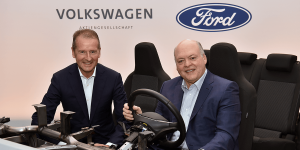 VW is negotiating to develop a second MEB-based electric car as part of the cooperation with Ford, which was sealed in July. The original agreement provided for Ford to purchase 600,000 MEB kits from Volkswagen for its first own model. Now it could become significantly more.

According to the German Handelsblatt, the decision to build a second MEB-based electric car for the European market is moving closer. “Yes, we are in talks about this,” Ford Europe boss Stuart Rowley confirmed. From an economic point of view, it does not make sense “to produce only one car based on MEB”. Volkswagen boss Herbert Diess had also previously spoken with his employee newspaper, announcing the possibility of a “new supply contract for a second vehicle”. This could allow VW almost to double their MEB platform deliveries to Ford.

In July it was considered ripe for a decision that the European Ford subsidiary would offer “at least one purely battery electric vehicle in large numbers” in Europe from 2023. To this end, the carmaker will purchase VW’s electrical construction kit, including battery packs and associated components to develop its electric vehicles on this basis. The Americans do not say how high the license fees are for the use of the MEB.

Ford Europe will develop its first MEB electric car in Cologne. Rowley does not yet want to confirm whether it will also be produced there. To build the vehicle in one of the German Ford factories “is a possibility”, he told local media sources. However, there is much to be said for the main plant in Cologne, including the planned start of production in 2023, when the Fiesta currently rolls off the assembly line.

At the end of June, Ford announced an extensive restructuring program in Europe, 12,000 jobs are to be cut. In its core business, the manufacturer has its back to the wall: the current fleet, which is selling sluggishly in Europe anyway, is consuming too much. From 2021, there will be high fines in the EU. Without electric cars, Ford will probably not be able to reduce fleet consumption fast enough. This is why there will now be an electrified version for every new model in the future. According to Rowley, electrified cars will account for more than half of sales by the end of 2022.

And what does Volkswagen get out of all this? It has now been half a year since the Wolfsburg company announced at the Geneva Motor Show that it intends to open the MEB to external manufacturers. The Aachen Startup e.GO Mobile was the first user to be presented. Ford is the second, much larger purchaser of the electrical construction kit. The message Volkswagen is conveying in this way is: For many car manufacturers, the MEB can become the technical basis for their entry into electric mobility. The body composite, which is made of mixed aluminium-steel-plastic construction, is self-supporting. And thanks to the modular structure, the upper body area can be detached from the MEB chassis, which should make many vehicle variants possible.

The advantages that VW achieves by selling the modular system are apparent: higher quantities lead to economies of scale and lower costs. And every MEB vehicle would probably also contain a Volkswagen battery, which could also increase the purchase volumes of the manifesting joint venture with Northvolt for cell production. In a nutshell: As “platform professionals”, the VW managers want to “establish the MEB as the standard for e-mobility”. It is also certain, however, that the MEB platforms sold to third parties will ultimately only make up a minor portion of the MEB spread. VW intends to focus on its Group brands. VW is currently developing 27 MEB models, with a target of 70 by 2028.