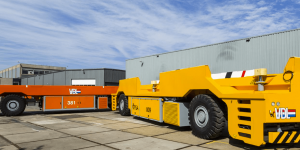 A total of 80 AGVs (Automated Guided Vehicles) will be manufactured by VDL Automated Vehicles and used to transport heavy ship containers at the port terminal. The AGVs are scheduled to go into service in Singapore by 2023.

ABB’s chargers and supporting infrastructure for the autonomous vehicles should already be installed by the end of 2020. ABB is contracted to provide 450 kW fast chargers, the development and supply of prefabricated container solutions with integrated chargers, medium and low voltage switchgear, transformers and the associated control and monitoring equipment. The fiscal details of the contract have not been released.

“The project combines two of the biggest trends driving the mobility industry, the rise of autonomous vehicles and the introduction of electric vehicles,” said Frank Muehlon, Managing Director for ABB’s global charging infrastructure business. Fast-charging the AGVs is essential for efficient container handling and increasing the capacity of the port.

Although the Swiss company ABB is an industry leader that has installed 11,000 DC fast-chargers in 76 countries, this will be the first time that ABB has provided charging infrastructure for an autonomous, commercially operated fleet. In this Singapore project, the company has had to tailor their charging solutions, creating individualised end-to-end charging connections for the AGVs.


Singapore’s Tuas Port is to become the largest in the world by the time it is fully completed in 2040. The future annual capacity of the huge industrial port is estimated at 65 million containers. The first berth is scheduled to go into operation in 2021.

The 80 AGV’s provided by the VDL subsidiary VDL Automated Vehicles are 15 metres long and 2 metre high models have a lifting weight of up to 65 tonnes and a maximum speed of 25 km/h.

According to VDL, the order volume amounts to “several tens of millions of euros”. In 2015, the company delivered two prototypes to Singapore – apparently to the complete satisfaction of port operator, PSA. VDL Automated Vehicles has already gained a great deal of experience in the field: The Dutch company have already delivered similar vehicles in Europe – to ECT in Rotterdam in the Netherlands and to BASF in Ludwigshafen, Germany among others.

In Germany, too, electric AGVs are regarded as a desirable transport solution in port logistics: Just a few weeks ago, Hamburger Hafen und Logistik AG (HHLA) took delivery of the first series-produced container transporter with a lithium-ion battery at the Altenwerder container terminal. The port operator intends to handle the logistics there completely with electric vehicles by the beginning of the next decade. The 26.5-ton AGVs planned for Hamburg will be manufactured by the Finnish machine specialist Konecranes. The investment costs for the entire project are estimated at 60 million euros, with the EU contributing eight million euros.

Hamburger Hafen und Logistik AG (HHLA) is also testing the extent to which its automatic container transport vehicles (AGVs) can be integrated into the German energy grid as flexible storage units as part of the FRESH funding project, thus contributing to grid stability.