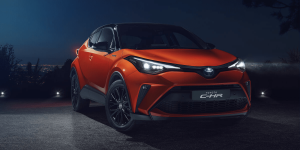 After the new Corolla, the C-HR is the second Toyota model to offer customers a choice of two hybrid options. The crossover SUV will also be available with a 132 kW 2.0 litre hybrid system. The hybrid drive with 1.8-litre petrol engine and 90 kW system output will keep being offered in the range.

The C-HR has a 132 kW drive with a standard consumption of 4.0 litres (92 grams of CO2 per kilometre), while the 90 kW drive model with 3.8 litres (86 grams of CO2 per kilometre) is somewhat more economical on paper. According to experts, both hybrids are likely to account for the majority of sales over the petrol version. As is well known, Toyota no longer builds diesel models at all.

The introduction of the second hybrid option is part of a small facelift, although the characteristic appearance has only been changed in detail. The most striking features are the headlights and rear lights, which now feature LED technology. Toyota is now installing a new multimedia system in the interior that supports Apple Carplay and Android Auto, among others. In addition, navigation charts can now be updated “over the air”.

The chassis has also been slightly adapted. The revised wheel suspension is designed to improve driving comfort. According to the communication, the new components will also reduce noise and vibration levels.

Toyota has not yet mentioned the prices and market launch of the facelift model. So far the CH-R with 90 kW hybrid costs at least 28,290 euros, some petrol variants are slightly cheaper. For the Corolla, the price difference between the two hybrid options is 2,000 euros. The CH-R with 132 kW hybrid should therefore cost slightly more than 30,000 euros.