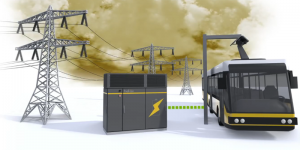 Heliox has prepared a battery-supported opportunity charging station for electric buses and e-trucks. Called SprintCharge, the pantograph equipment includes a stationary battery for storage to enable the high power charges without disrupting the grid.

The official launch will be at Busworld in Brussels starting next week following a pre-launch at the UITP in Stockholm, last June. Koen van Haperen, Heliox CCO, explains the working of the new SprintCharge station: “The battery can deliver a much higher power charging sprint than the grid connection can support, allowing a smaller, cheaper grid connection. While the opportunity charger is not being used, the internal battery is refilled, allowing it to draw a more constant, lower power from the grid, thus saving considerable electricity costs.”

This also allows for more flexibility when choosing a location and van Haperen went on to point out that Heliox “took the possibility to make the SprintCharge bidirectional”.

Heliox is working with various cities in Europe to provide charging infrastructure both at depots and for opportunity charging. Recent projects include a network with 13 MW for 100 electric buses in Amsterdam as well as a 40-station bus depot installation for Unibuss in Oslo.