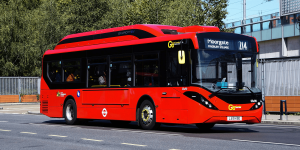 BYD’s British partnership with ADL has delivered another 22 electric buses to Transport for London (TfL) operator Go-Ahead London. The latter has now received a total of 98 electric buses from BYD ADL with a new model being on the way.

The 22 Enviro200EV models are now in service on route 214 between Highgate, Camden Town, King’s Cross and the City. This time Go-Ahead received the shorter 10.2-metre variant that provides a reduced turning circle and enhanced manoeuvrability. A 9.6-metre model will follow later in the year with 11 buses for Go-Ahead London, and the operator additionally has 13 electric buses with a length of 10.8-metres on order and scheduled to go into service in early 2020.

Taken the order volume, Frank Thorpe, Managing Director at BYD UK said “the order book looks very healthy for both our single deck and double deck products – and against a broadening customer portfolio outside of London, too.” He added that Manchester and Birmingham are among the cities that have placed orders.

The London market remains the biggest however as BYD claims over 170 electric buses now operating on TfL services, with over seven million electric miles having been completed, and more than four million completed by Go-Ahead alone. The total fleet of 98 e-buses means Go Ahead runs nearly half of the total of over 200 electric buses that the BYD ADL partnership has delivered to operators throughout the UK.