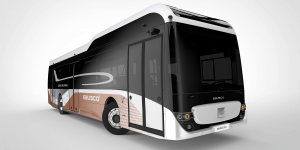 Ebusco presents the third generation of its electric bus, claiming a range of up to 500 km due to a 33 per cent weight reduction. The Ebusco 3.0 will debut at Busworld in Brussels on Friday and is scheduled to go into production in the Netherlands in mid-2020.

The 12-metre electric bus weighs 8.530 kilos also because it largely consists of composite parts which also reduce noise, according to a press release ahead of the debut in Brussels. The Ebusco 3.0 can carry up to 90 persons.

The batteries are all placed in the floor and not on the roof as with previous models, thus allowing a lower centre of gravity. Considering the claimed range of 500 km with one charge, the electric bus is designed for overnight charging at the depot with no pantograph charging option. Technical details on the type of batteries have not been revealed but the current model Ebusco 2.2 delivers up to 423 kWh for a range of up to 450 km.

In addition, the large exterior mirrors were replaced by cameras. This should improve aerodynamics and safety. The camera images are displayed to the driver in a large dashboard. As the body is rigid thanks to the composite construction, the window areas are also very large, which should increase the driver’s overview and passenger comfort, says Ebusco.

The Ebusco 3.0 is expected to be ready to go into production in Ebusco’s production plant in the Dutch town of Deurne by mid-2020. While Ebusco says it has developed the new model for “production in large numbers” the all-electric bus company did not specify any capacity for far.