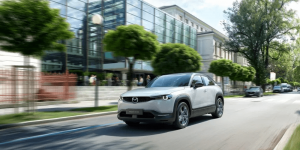 Mazda has now officially unveiled its first battery-electric model. The electric SUV MX-30 is equipped with a 35.5 kWh battery and can now be reserved. However, sales in Europe will not start until late 2020, with a First Edition starting at 33,990 euros in Germany.

Deliveries in Germany are set to launch in March, while prices elsewhere have not yet been announced. The battery-electric SUV is expected to cost under £30,000 in the UK. Rumour also has it that a variant with a Wankel rotary engine will follow later as a range extender.

The MX-30 is powered by an electric motor (AC synchronous motor) with a peak output of 105 kW and 265 Nm of torque. The battery has a capacity of 35.5 kWh with a range of 200 kilometres according to the WLTP cycle. The battery can be charged via CCS to 80 per cent in 30 to 40 minutes. Mazda specifies a maximum DC charging capacity of 50 kW. Depending on the market, the MX-30 will also be equipped with a CHAdeMO connection. With an AC charging capacity (type 2) of 6.6 kW, the charging process should be completed within 4.5 hours.

At first glance, the performance data may seem a little sober compared to its competitors, as Mazda positions the car as a second car. “Alongside the electrification technologies we are introducing across our range, being a smaller manufacturer we focused all our efforts on creating an electric car that we anticipate will be a second car ,” said Yasuhiro Aoyama, President and CEO of Mazda Motor Europe.

The MX-30, which is around 4.40 metres long, 1.80 metres wide and 1.57 metres high, is visually reminiscent of the CX-30. The counter-opening doors are particularly striking. This kind of concept is already familiar from the BMW i3, among others. Mazda seems to have followed a philosophy of “less is more” with their car design. The electric SUV seats five people and features various “eco-friendly materials” in the interior. Vegan alternatives, for example, replace genuine leather. For example, there are textile covers made from recycled plastic bottles. The shelves of the floating centre console, which offers additional storage space, use environmentally sourced cork.

The First Edition features include Mazda Connect with an 8.8-inch display and a further 7-inch display for operating the air-conditioning system. There is also a head-up display. In addition, there are safety systems such as emergency brake assist with pedestrian detection, lane change and lane departure warning, traffic sign detection, parking assistance and distance control with traffic jam assistant. The vehicle can be controlled via App, for which purpose, the My Mazda app will be expanded by corresponding connectivity functions.

The Mazda MX-30 can now be reserved as a First Edition for a deposit of 1,000 euros. However, sales in Germany are not expected to start until March 2020 at an expected price of 33,990 euros, with deliveries in Europe to follow in the second half of 2020.

Update 29 October 2019: Mazda’s head for Europe, Yasuhiro Aoyama, has now confirmed plans for a longer-range version of Mazda’s first electric car. It will be explicitly be designed as a second model and come with the aforementioned Wankel rotary engine as a range extender.